Security Guard Hailed A Hero For Sheltering Dog From Rain

"This is the hero we all need." 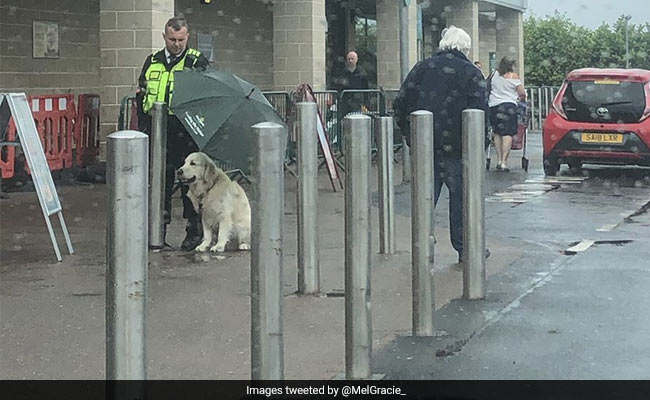 Ethan Dearman protected a dog from getting wet in the rain.

Not all heroes wear capes - this one simply held an umbrella over a dog. A picture that has won thousands of fans across the world shows a security guard sheltering a waiting dog from the rain while getting wet himself. The heartwarming moment was captured outside a Morrisons supermarket outlet in Glasgow, Scotland, reports the Evening Standard.

The picture, clicked and shared on social media by Twitter user Mel Gracie, shows the security guard holding a black umbrella over the dog on Sunday morning as the pooch patiently waited for his owner to finish shopping. According to news website People, the guard was later identified as Ethan Dearman and has won hearts with his act of kindness.

"Shout out to this @Morrisons security man keeping this good boy dry," the Twitter user wrote while sharing the picture.

"He said 'well you never know how dogs feel about the rain'".

Shout out to this @Morrisons security man keeping this good boy dry. He said ‘well you never know how dogs feel about the rain' pic.twitter.com/B9CPWI7u5Q

The photo has collected nearly 1.5 lakh 'likes' and more than 20,000 'retweets' on the microblogging platform since being shared three days ago.

"This is the hero we all need," wrote one Twitter user in response to the picture.

"Just beautiful.. this man deserves a pay raise," said another.

Mr Dearman also retweeted the picture and wrote: "Looks like I made a lot of people happy today."

The dog was later identified as Freddie when his owner, David Cherry, saw the viral tweet. He also shared an adorable picture of Freddie from when he was a pup while thanking the security guard.

Thanks to security man @dearmanethan for putting the umbrella over Freddie when it started to rain! So kind! He's always so nice to my brother Stuart, my Dad and our Freddie!Here's Freddie when he was a puppy! pic.twitter.com/TJuX41ozFE