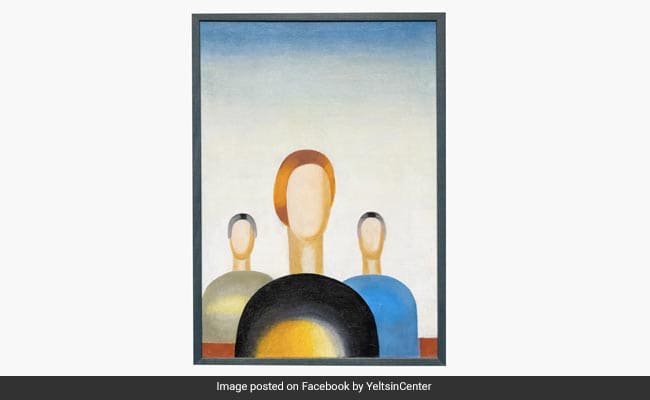 'Three Figures' by Anna Leporskaya - before it was defaced by a bored security guard.

A security guard at an art gallery in west-central Russia was fired on his first day on the job for defacing a valuable painting. The guard allegedly took out a ballpoint pen and drew eyes on two of the three faceless figures in the piece of art because he was "bored". His desire to do something other than defend the gallery's artworks from similar mischief cost him his job. The vandalism occurred at the Boris Yeltsin Presidential Center in the city of Yekaterinburg in west-central Russia, where the painting was on display. Two visitors spotted the extra details on the figures and reported it to a gallery employee.

The guard is believed to have defaced the painting on December 7, 2021, but he was sacked this week after his identity was ascertained, stated a Metro report.

The artwork, called ‘Three Figures', was insured for 74.9 million Russian Rubles, which is the equivalent of 7,40,000 pounds (roughly $1 million or Rs. 7.51 crores), and was on display as part of an exhibition titled ‘The World as Non-Objectivity. The Birth of a New Art'. It was created by Anna Leporskaya, a student of Russian avant-garde artist Kazimir Malevich, between 1932 and 1934.

The Yeltsin Centre said in a statement that they had identified the private security organisation employee “who painted the eyes on the figures” but did not disclose his name. “The damage was done with a ballpoint pen,” the art centre added.

A report in The Art Newspaper Russia, which broke the news, stated the ink has slightly penetrated into the paint layer since the titanium white used to paint the faces was not covered with author's varnish, as was often the case in abstract paintings of that time. Fortunately, the vandal drew with a pen without strong pressure, so, the relief of the strokes as a whole was not disturbed.

“His (the security guard's) motives are still unknown but the administration believes it was some kind of a lapse in sanity,” the exhibition's curator, Anna Reshetkina, told the Guardian.

Artist Anna leporskaya's $1million painting named 'Three Figures' was ruined after a security guard drew pair of eyes on the faceless figures in the painting. On being asked he is said to have become bored on the first day of his duty.@MailOnlinepic.twitter.com/36lTMEzHcB

Experts believe the painting can be restored to its original form without long-term damage and they are working on it. They expect the restoration to cost around 2,50,000 Russian Rubles (about Rs 2.5 lakhs).

The security guard faces a vandalism charge, which comes with a fine of 40,000 Russian Rubles (about Rs. 40,000) and a one-year correctional labour sentence. Last week, the police said that they had started an investigation.