"The logo has the vector image of a woman with a bindi!" wrote a LinkedIn user.

In the day and age of social accountability, another brand has come under fire - this time for gender-targeted marketing. Scotch-Brite has promised to change its age-old logo, which depicts the face of a bindi-wearing woman, after being called out for it on social media. In a now-viral LinkedIn post shared Wednesday, Karthik Srinivasan posted a series of pictures of Scotch-Brite products that feature the logo on their packaging.

"The logo has the vector image of a woman with a bindi!" wrote Mr Srinivasan, pointing out that only products like brooms, bathroom wipes and toilet brushes carried the logo. "While a lint roller does not carry this, other products like scrub pad/sponge, sink brush, broom, bathroom wipe, stainless steel scrub, toilet brush do carry it," he observed.

In short - it appears as if only products related to cleaning and household appear with the logo of a woman's face.

"The gender marker is clear when you see that the lint roller, which has a man's coat in the product pack, doesn't have it!" wrote Mr Srinivasan, adding that it seemed indicative of 3M's presumption about who would be using the cleaning products. 3M is Scotch-Brite's parent company, headquartered in the United States.

Urging the company to change their logo, Mr Srinivasan concluded: "In 2020, such gender markers seem awkward and out of place. I sure hope the good folks at 3M take note of this legacy logo and update it."

You can read the post in its entirety here.

His post has collected over a thousand reactions and several comments, triggering a debate on the platform.

"This was an eyeopener! This is a perfect example of sublime subconscious gender stereotyping in the minds," wrote one person in the comments section.

"While it's an interesting observation that you make, the fact remains that majority of Indian households hire domestic help to do most of their cleaning activities. And majority of these domestic help are women. So yes a large part of the end user of Scotch-Brite products are women," another countered.

Scotch-Brite, however, took note of the post and promised change. 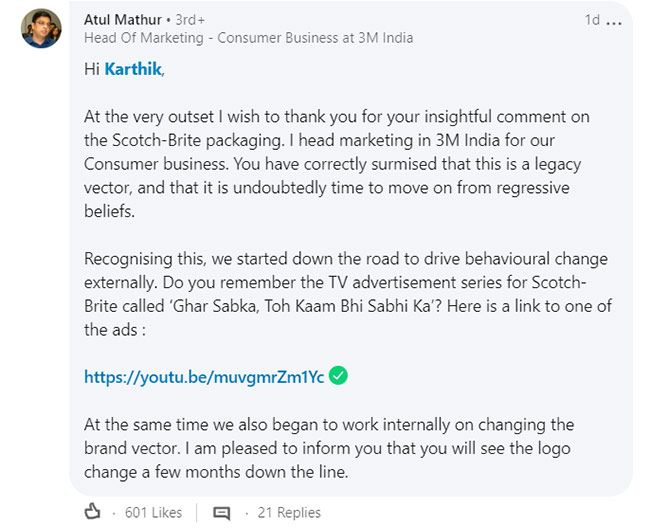 Head Of Marketing - Consumer Business at 3M India, responded to it by agreeing that the company needed to move on from its legacy vector.

"At the very outset I wish to thank you for your insightful comment on the Scotch-Brite packaging. I head marketing in 3M India for our Consumer business. You have correctly surmised that this is a legacy vector, and that it is undoubtedly time to move on from regressive beliefs," wrote Mr Mathur.

"At the same time we also began to work internally on changing the brand vector. I am pleased to inform you that you will see the logo change a few months down the line," he said.

3M, in a statement, said "We wish to clarify that Scotch Brite's new logo that will be released in the next few months, will not display the image of a woman because we recognize that household chores are equally shared by all family members, and we understand the need to make the product packaging gender neutral."

This is not the only time that social media users have managed to bring about change in names, logos and other features perceived as regressive. The debate around racism forced a slew of companies in the US to change racist names and packaging. Most notably, PepsiCo announced that it was scrapping the Aunt Jemima breakfast brand, admitting that its origins were from a "racial stereotype", reports Forbes.

In India, the debate around colourism forced Unilever to drop the word "fair" from its "Fair & Lovely" range of products and compelled Johnson & Johnson to stop selling its line of skin-whitening products in India. Meanwhile, matrimonial website Shaadi.com also removed its skin colour filter after facing backlash from users.