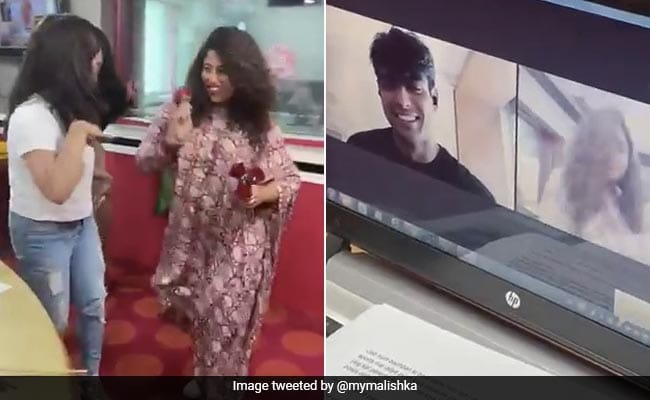 RJ Malishka's online interview with Neeraj Chopra was preceded by a dance performance.

Radio jockey Malishka Mendonsa and her team at Red FM are facing widespread criticism for a video that shows them dancing in front of Olympic gold medalist Neeraj Chopra before an online interview. Footage shared by the RJ on Twitter yesterday shows her and her team dancing to Uden Jab Jab Zulfen Teri from the 1957 film Naya Daur. The camera then pans to a laptop in front of them to reveal that the performance was taking place in front of 23-year-old Neeraj Chopra, who had joined them over a Zoom call for the interview.

"Ladiesssss..Yes I got the hard hitting, deep answers too but..Take the first 4 secs before the cam moves to the zoom call to guess who we are dancing for," wrote RJ Malishka while sharing the video, which has racked up over 6 lakh views on the microblogging platform.

Ladiesssss..Yes I got the hard hitting, deep answers too but..Take the first 4 secs before the cam moves to the zoom call to guess who we are dancing for???? ;) #udejabjabzulfeinteri and then tell me I did it for all of us???? #gold#olympics#neerajchopra@RedFMIndia@RedFM_Mumbaipic.twitter.com/SnEJ99MK31

Reactions to the video were overwhelmingly negative, with several Twitter users pointing out that not only was the dancing unprofessional, it would have also been slammed as sexist, had gender roles been reversed.

"Utterly embarrassing. If the genders were reversed, it would be considered sexual harassment," wrote Twitter user Akancha Srivastava.

Utterly embarrassing. If the genders were reversed, it would be considered sexual harassment. We need to behave better, much better. #NeerajChoprahttps://t.co/5PXVVGHyGS

"If shameless objectification had faces this is how it would look," said author-historian Vikram Sampath.

If shameless objectification had faces this is how it would look. Kudos to 23 year old @Neeraj_chopra1 for keeping his sanity intact in the midst of such predators who have zero respect for him, his struggle or his achievements & salivate at him as a sex object. Shame media! https://t.co/vLSJLGpEXt

"What if the genders were opposite in this case? Had @RedFM_Mumbai allowed that too?" asked a Twitter user.

Sad to see you guys doing this and even sad is the fact that @RedFMIndia is allowing you all to do it.

I mean, what if the genders were opposite in this case? Had @RedFM_Mumbai allowed that too?

"Cringeworthy" was a word that came up several times as people slammed the dance performance.

Absolutely crass and cringey...I hope this stupidity doesn't desist our young olympians from winning a medal in future , thinking of going through an ordeal like this after winning the medal...???? https://t.co/aOVbDODSl9

Just reversing the genders and imagining the furore this would have created.

Taking informality & “bajate raho”
too far with a visibly uncomfortable and conscious interviewee.

Why is this considered funny and entertaining beats me.

Another clip from the interview is also being slammed on Twitter. In the clip, RJ Malishka asks Neeraj Chopra for a virtual hug or "jaadu ki jhappi" - a request he politely declines with a Namaste and says: "Namaste... Aise door se hi Namaste (I'll say Namaste from a distance)" .

Neeraj Chopra and other athletes from India's Olympic contingent were invited to the official residence of Prime Minister Narendra Modi to have breakfast with him earlier this week. While interacting with Mr Chopra on Monday, PM Modi hailed the star athlete and said, "When you threw your second attempt, you celebrated straight away, this can only come on the back of a lot of confidence."

Neeraj Chopra has gained 14 places to become world number two in the latest world rankings after his sensational show at the Tokyo Olympics.