Earlier this month, a breathtaking video showed a huge formation of clouds rolling towards a row of neat houses on an otherwise empty street. 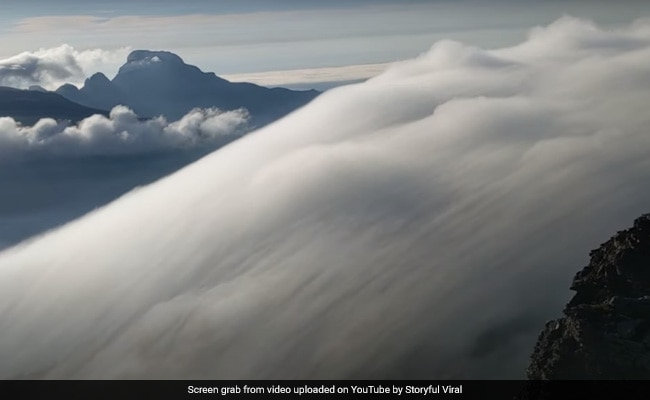 The cloud formation condensed into silky thin strings that look like cotton candy.

A video of a spectacular cloud formation is going viral on the internet. It shows clouds rolling over Bluff Knoll peak in Western Australia's Stirling Range. The footage has been made available by Storyful.

It was shot last year by Jogar Gosrani shortly after sunrise, according to Storyful. In the caption of the video, he said it looks like a "reverse cloud waterfall".

"The cloud formation condensed into silky thin strings of cotton candy as it made its way off the rounded edge toward freedom on the other side of the mountain," Mr Gosrani said in the caption of the video, describing his experience witnessing this "magical" occurrence.

The video is again going viral and has been posted on Twitter by many handles. One of the posts, by Wonder of Science, has received 3,47,000 views and more than 10,000 likes.

Amazing videos of natural phenomenon are internet's favourite. Earlier this month, a breathtaking video showed a huge formation of clouds rolling towards a row of neat houses on an otherwise empty street. At first glance, the unusual cloud formation - known as arcus, or roll cloud - looked a bit like waves.

The caption of the post read, "I was under the impression it was a tsunami I've never seen clouds like this before."

The video was shared on Reddit but the location where it was shot was not revealed in the post.

Then, last month, a video of a massive sea wave touching clouds surprised the internet. Shared by Buitengebieden, the nearly 40-second video showed a wave, after reaching its crest, brushing through the cloud-like formation, touching them gently and then coming down.

However, these were not real clouds. Those were actually the sea aerosol (SSA). The SSA is one of the most widely distributed natural aerosol.

According to the website of National Library of Medicine of the United States government, SSA looks like clouds but is formed by the ocean mostly by ejection from bursting bubbles at the air-sea interface.

Viral Video: Two Bears Get Into A Ferocious Fight In A Garage In US