Ms Sharma is lovingly known as 'Dancing Dadi' and she has won hearts on the internet with her energetic dance moves in the past as well. 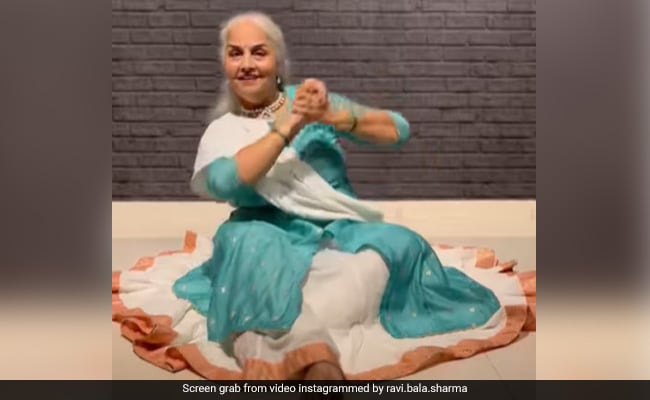 Age is just a number for 63-year-old Ravi Bala Sharma who left the internet mesmerized with her graceful and expressive dance moves. The content creator shared her own version of dance to the song Lagan Laagi Re, a song sung by Shreya Ghoshal and Kavita Seth on Instagram. The video was even shared by singer Shreya Ghoshal. Dressed in a blue kurta and white skirt, Ms Sharma can be seen performing the super hit number with utmost grace.

Ms Sharma is lovingly known as ‘Dancing Dadi' and she has won hearts on the internet with her energetic dance moves in the past as well. In the new video, Dadi is seen executing hand gestures and expressions with a lot of grace. The video has gone viral and so far has garnered over 2,54,000 views and 6,082 likes.

The internet was quick to show love and shower her with praise. Painter Manjri Varde wrote, “Such beautiful gestures and expressions.” A social media user wrote, “The grace and aura you exhibit is beyond words! What a mesmerizing performance,” another user wrote, “Aunty u are such an inspiration that learning and improvement have no age. u are so beautiful.”

Talking about the love and appreciation she has received on social media, Ms Sharma told NDTV in an old interview, "I had never imagined that something like this will happen and my dream will come true at this age. I just posted my videos and everyone liked them."

She hopes that her story will inspire others to pursue their passions, irrespective of age.

"If you are aged don't think this is it, and that you can't do anything," she advises.

Here Are The Most Common Passwords Used By Indians In 2022