"Reality Is Far From Sparkling": The Maharani Of Baroda On Being A Royal

"We led a very ordinary life," says Radhikaraje Gaekwad, the Maharani of Baroda. 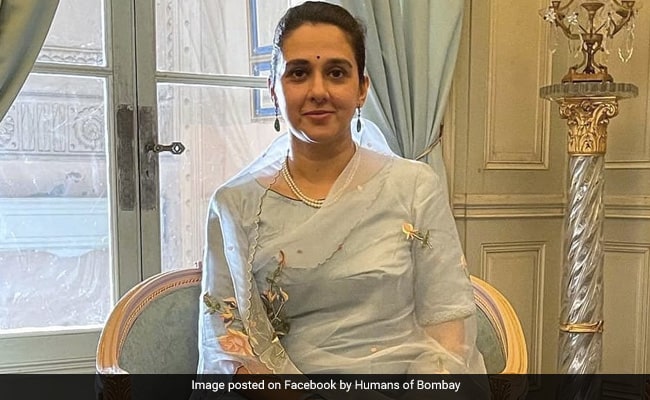 Although she was born into the Wankaner royal family and married the Maharaja of Baroda, Radhikaraje Gaekwad eschews the notion that her life has been extraordinary. Her father, Maharajkumar Dr Ranjitsinhji of Wankaner, was the first one to give up his title and become an IAS officer. "In 1984, when the Bhopal gas tragedy struck, he was posted as a commissioner there," Radhikaraje Gaekwad tells Humans of Bombay. She was only six at the time of the tragedy, but the Maharani Of Baroda says she remembers her father doing his duty "fearlessly" and helping evacuate people.

"That night, I learnt my first lesson-'You can't expect things to fall into place without lifting a finger'- a lesson that Baba stressed upon throughout my growing up years," she says.

A few years after that, the family moved to Delhi. Ms Gaekwad describes her life there as "very ordinary", remembering that she used to go to school in public DTC buses thanks to her mother, who believed in making her children independent.

"We led a very ordinary life, so when I visited Wankaner during summer holidays, I'd be amused by the attention people gave me," the Maharani Of Baroda told Humans of Bombay in her interview.

Keen to stand on her own feet, she started looking for a job after graduating in history. "At 20, I got a job at Indian Express as a writer. Side by side, I also pursued my Master's degree," says Ms Gaekwad, adding that she did not realise at a time what a big deal it was for her to be able to work. "I was the first woman in the family to work; most of my cousins were married by 21!" she says.

Radhikaraje Gaekwad worked as a journalist for three years before her parents started looking for a groom for her. "I had met a few men before meeting Samarjit, the Prince of Baroda - he was different from the rest," she says. "When we went out for the first time, he was pretty cool about me offering to pay. And when I told him that I wanted to study further, he encouraged me."

Ms Gaekwad says she found her true calling after getting married and coming to the Lakshmi Vilas Palace in Baroda, which is still the residence of its royal family.

"The Baroda palace walls had Raja Ravi Varma paintings, so I thought, 'Why not revive old weaving techniques inspired by these paintings?'" she says. "This way, I could even empower the local weavers." The Maharani Of Baroda started the initiative along with her mother-in-law and it was a resounding success, with their first exhibition in Mumbai being sold out completely.

During the lockdown, the Maharani Of Baroda was also able to help artisans who had lost their source of livelihood. "My sister and I travelled across villages and started posting about their plight on social media-people offered to help out in large numbers. In a few months, we were able to support over 700 families," she says.

The royal concludes her interview with some inspiring words. "Sometimes, people just assume that being a queen is wearing a tiara, but the reality is far from sparkling," says the Maharani of Baroda.

"I've broken traditional stereotypes, set my own boundaries, and most importantly, I've done only what was not expected of me. And that's the heirloom I'm passing down to my daughters-to choose the life that they want to live and have no regrets at all," she concludes.