Python Pops Out Of Pool Table In Middle Of Game, Shocks Players

"How cute is that little face," said one person for the carpet python 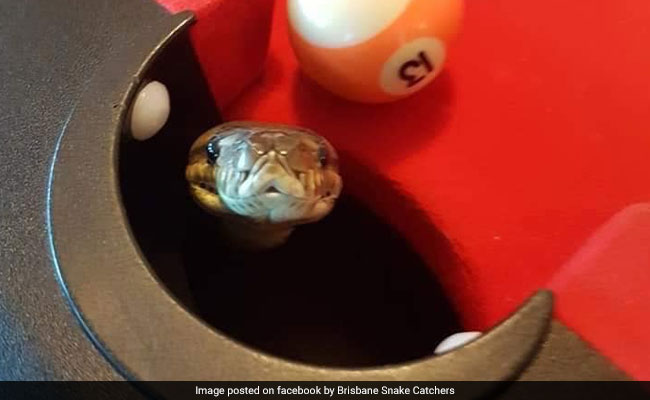 A python was found inside a pool table in Brisbane recently.

A group of friends enjoying a round of pool were recently left shocked by an unwanted player - a python. The carpet python made a surprise appearance by popping out of a corner pocket of the table with a "cheeky grin" in Brisbane, Australia. A Facebook post by Brisbane Snake Catchers, shared on Tuesday, shows the snake curled up inside the table.

"When you're having a causal game of pool with your mates and this snake pops up to greet you with a cheeky grin," wrote Brisbane Snake Catchers, sharing two pictures of the carpet python.

"Make sure you check your pool table pockets before sticking your hand in," they added.

The post has gone viral online with over 4,000 'shares' and thousands of comments. For a change, most people seem to be of the opinion that the snake is cute.

"What a cutie," wrote one person in the comments section. "How cute is that little face," another added.

Carpet pythons are non-venomous snakes common in Australia. Another carpet python had made news recently for hanging out on a family's verandah.

"Carpet Pythons are the most common snake we catch and don't seem to bothered by humans. They will often hang out in entertaining areas like this and won't move even if people are around. Majority of other snakes will retreat to cover when they see someone nearby," Sunshine Coast Snake Catchers had written while sharing a video of the snake.