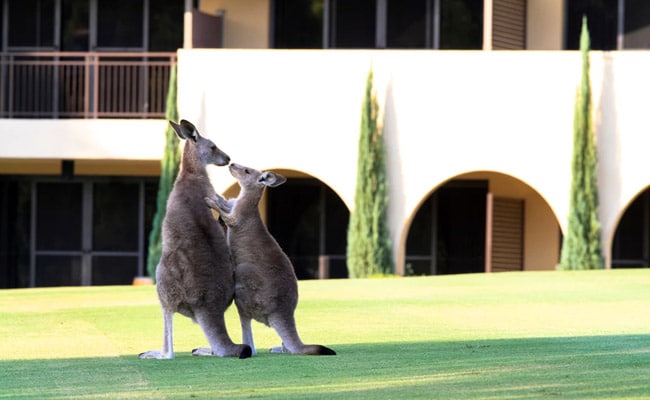 Lake Macquarie's biggest attraction is not the azure saltwater lagoon that gives the Australian city its name. Nor is it the mountains of Watagans National Park, where you can hike past waterfalls and take in staggering views of the New South Wales coast.

Instead, the most popular tourist draw there in this post-Instagram era seems to be Morisset Hospital, a former insane asylum whose grounds - declared a wildlife refuge in 1972 - are now home to a mob of wild kangaroos.

Despite the fact that Morisset remains an active psychiatric hospital, thousands of visitors flock to the fields around the clinic each year, hoping for an encounter with one of Australia's most iconic animals. And a kangaroo encounter is almost guaranteed to happen, given how conditioned the animals have become to visiting humans, said Australian MP Greg Piper, who represents Lake Macquarie.

Because of the site's popularity, boosted by pictures on social media, it's unlikely local officials can stop tourists from continuing to go there, he noted.

"That joey has left the pouch, so to speak," Piper said in an address to parliament Tuesday, according to the Newcastle Herald.

However, a rash of reported kangaroo attacks on tourists has prompted several officials, including Piper, to call for more visible warnings to be put up at the unofficial attraction. They're also urging visitors to remember that, even though a kangaroo might seem docile enough to pose for a selfie, it's still a wild animal that can suddenly turn on you and slice a three-inch hole in your abdomen.

In a four-minute video published Monday, Piper first described how to get to Morisset Hospital, about 60 miles north of Sydney, and cautioned that there were no public restrooms or water fountains there.

Images of humans interacting with the bouncing marsupials in a forest clearing flashed across another corner of the screen, depicting something akin to Nara Park or the Island of La Grande Jatte -- but with kangaroos.

"Upfront, please realize these kangaroos are being visited on what is a mental health facility and a residential facility for people with developmental disability," Piper said of the public hospital.

Here, the video morphed from travelogue to governmental service announcement. The camera panned across several signs in the area that specifically instruct people not to feed the kangaroos - though Piper acknowledged people were feeding them anyway. (Like a defeated Jamie Oliver, he urged them to at the very least avoid giving the 'roos processed food.)

But the biggest problem, he said, is that the human-provided food can sometimes trigger unpredictable aggression in the animals, especially with the male kangaroos.

"Be aware that due to the feeding that has occurred, these kangaroos are not just desensitized, they will literally come to you looking for food," Piper said. "What many tourists seem to overlook is that these are wild animals and they are equipped with long, sharp claws and they do actually injure people from time to time. We're not wanting to overstate the risk here but people have been attacked."

The video began alternating images of past kangaroo encounters gone awry: Most people sported bloody scratches and slash marks on their faces, backs or chests. One man held a blood-soaked shirt beneath a gaping hole in his abdomen. In another picture, a shorts-clad tourist found himself on the receiving end of a marsupial's powerful kick, as two other kangaroos looked on.

Shane Lewis, who runs a local shuttle service that regularly drops people off at the site, said in the video that he had seen many visitors get injured through feeding the kangaroos.

"They've been kicked, scratched. One person even got 17 stitches in their face," Lewis said. "There have been scratches on shoulders, body limbs. One guy even left here in an ambulance where his whole stomach got cut from side-to-side."

That has not stopped people from recommending on various travel sites, such as TripAdvisor, that tourists bring along carrots or other items to feed the kangaroos if they visit Morisset Hospital. Instagram abounds with people taking selfies with the kangaroos, petting them, feeding them (even sharing food with them, Lady and the Tramp-style), mimicking them and even lying down on the ground with them - despite plentiful warnings about the kangaroo poop.

At least one local seemed fed up with it all.

"It's not an attraction, it's a hospital," the TripAdvisor user wrote. "Don't feed the roos, don't approach the roos. Don't do idiotic things like try to take selfies or pictures or your baby next to roos. They are wild animals. . . . Just don't."