Read inOther Languages
This Article is From Sep 22, 2020

Footballer Bruna Benites was surprised by a parrot landing on her head during a training session. 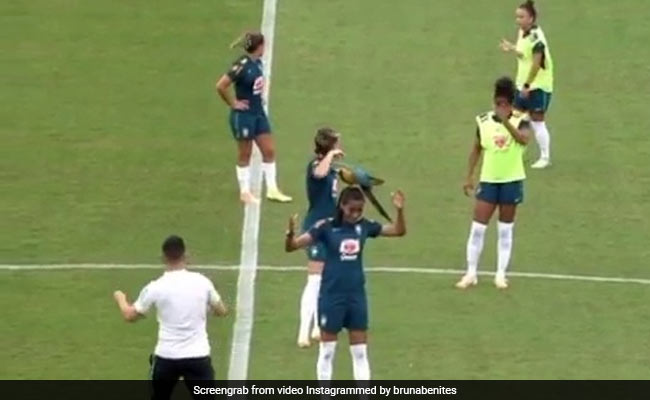 Footballer Bruna Benites was surprised by a parrot landing on her head.

A training session for Brazil's women's national football team was interrupted by a parrot landing on a player's head. The practice session was paused on Saturday as the parrot alighted on Brazil defender Bruna Benites, reports the BBC.

In a now-viral video, the bird can be seen sitting on top of Ms Benites's head. It was lured away with the help of a ball before flying to one of the goalposts.

Bruna Benites, 34, shared the clip on Instagram and used it to raise awareness about the fires devastating the nearby Pantanal wetlands and Amazon rainforest, reports Yahoo News. "Thousands of animals are losing their lives with the fires and if this continues to happen, scenes like the one you are seeing in this video will become impossible to be seen," she wrote.

The video has garnered over 37,000 views and a ton of amused comments on Instagram since being shared two days ago.

In a follow-up Instagram post, Ms Benites revealed that the parrot is a domesticated bird who lives nearby.

"This parrot lives here in an apartment in Granja Comary (Rio de Janeiro) with his human family and is a domesticated animal, who is very well treated by his owners. He is free and that is why he regularly visits our training sessions," she wrote, according to a translation provided by ESPN. "He usually watches from the changing rooms, near the goal, on the crossbar, but yesterday he was able to see things from a different angle."