The shocking video, which was reportedly shot in 2013 but only released to the public two days ago, was filmed and shared by International Animal Rescue 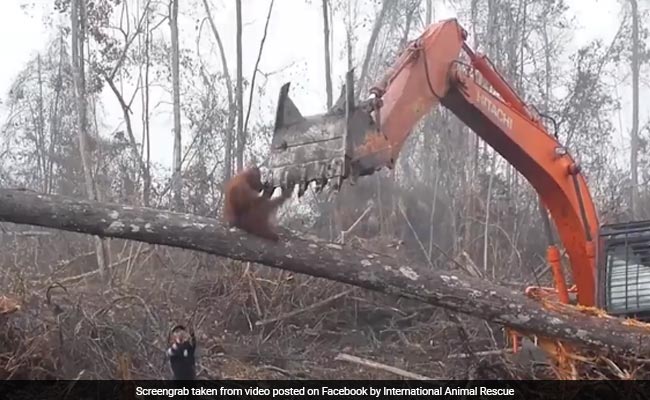 A heartbreaking video shows an orangutan that appears to be fighting off a bulldozer pulling down trees in its natural habitat in Indonesia. The video, which was reportedly shot in 2013 but only released to the public two days ago, was filmed and shared by International Animal Rescue, an animal welfare organisation.

The short clip shows shows the distressed primate trying to "confront" a bulldozer that is felling trees. "This desperate orangutan is frantically seeking refuge from the destructive power of the bulldozer; a machine that has already decimated everything else around him," International Animal Rescue writes on Facebook.

The NGO's team, which was present at the site, managed to rescue the orangutan.

Bornean orangutan populations have declined by more than 50% over the past 60 years, according to World Wildlife Fund. Their habitat has been reduced by at least 55% over the past 20 years.

"Unfortunately, scenes like this are becoming more and more frequent in Indonesia. Deforestation has caused the orangutan population to plummet; habitats are destroyed and orangutans are left to starve and die," the organisation adds.


Shared on World Environment Day, June 5, the video has been viewed over 155,000 times and shared over 4,900 times. The viral video has provoked strong reactions among viewers.

"This is so hard to watch! This orangutan was trying to protect the only home that he/she knew... A human would have done the same thing if someone was destroying his/her home," writes one person on Facebook. "Why didn't these workmen stop what they were doing to this poor creature... they should have ensured the animal was away and safe before continuing their work," comments another.

"Cheap, unhealthy palm oil is not worth decimating an entire species and the environment. To all those making the effort to try to end this and save the environment... and all impacted animals, THANK YOU!" writes a third. Click for more trending news