Read inOther Languages
This Article is From Dec 09, 2019

Only In India? Dog On Bike Steals Limelight From BBC Presenter

"I swear, this happens only in India," wrote one Twitter user. 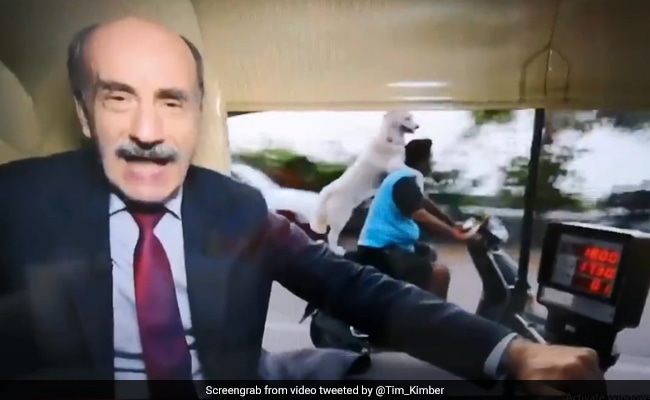 A bike-riding dog became the source of much amusement on Twitter recently.

As far as photobombs go, this one is among the funniest you will ever see. BBC presenter Tom Brook, who was in India to film a special episode of 'Talking Movies', had the limelight stolen from him by a bike-riding dog. A video shows Mr Brook in an autorickshaw on the streets of Mumbai when the dog, riding pillion behind its owner, shows up in the background. The video has gone viral online, delighting and amusing many.

In the video, Mr Brook is introducing himself when the white dog appears in the background. The dog is seen balancing itself on its hind legs, with its front paws on the shoulder of the man driving the bike.

"This is the most Indian photo bomb," wrote the Twitter user who shared the video online. Watch the hilarious video for a lovely surprise at the 16-second mark:

This is the most Indian photo bomb ???? pic.twitter.com/dtAcmByofW

The video has collected over 98,000 views since was shared online last Sunday. It has garnered hundreds of amused comments, with many calling it a classic example of "It happens only in India".

AHAHAHA classic! anything can happen in India.

I swear, this happens only in India. Haha. https://t.co/Dvo22UxUV6

This is one of the reasons I love going back to India. Stuff like that is just normal ???? https://t.co/fvEMvzUHo4

"Love it," wrote one person on Twitter, while another said "This made me smile". One Twitter user also shared another video of the dog

This isn't the first time an animal has managed to steal the attention from a BBC anchor. In August, a 'giant' spider hijacked a live interview on BBC News, amusing many.