A coral snake eats a rat snake in this viral video 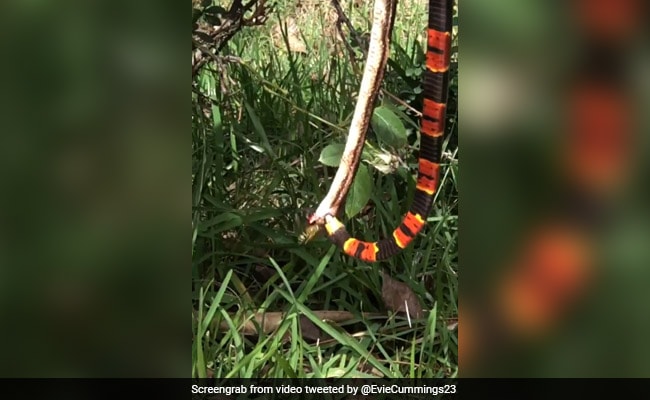 A viral video shows a snake eating another while a wasp attacks it.

A video of one snake eating another while an angry wasp attacks it is going viral online, leading to many calling it a "peak Florida" incident. Evangeline Cummings, an employee of the University of Florida, shot the video in her Gainesville backyard last week and shared it on Twitter, according to Fox News.

In the video, an eastern coral snake bites what appears to be a dead rat snake while hanging from a bush. A wasp then lands on the coral snake and it is seen thrashing around wildly, possibly in an attempt to get rid of it.  It is not clearly whether the wasp stung the snake.

"I believe I just witnessed a bee stinging a coral snake while the coral was dining on a rat (?) snake and I need your support to process this," wrote Ms Cummings while sharing the video on Twitter.

You can watch the video below, but be warned that it is not for the faint-hearted.

Um ok, ⁦@UFEntomology⁩ and ⁦⁦@MartaWayneUF⁩ , I believe I just witnessed a BEE ???? stinging a CORAL SNAKE ???? while the CORAL was dining on a RAT (?) SNAKE ???? and I need your support to process this. ⁦⁦@UF⁩ #FloridaBackyardpic.twitter.com/djbJJGxaUk

The video has been viewed over 42,000 times since it was shared online four days. It has also collected a ton of comments, some from people calling it gross and others from people thanking Ms Cummings for filming a rare sight.

It is not clear how the snakes ended up in the rose bush, although Ms Cummings shared her favourite theory on the microblogging website.

So we've now settled on our favorite theory: rat snake was dropped by a hawk or similar and landed in the rosebush. (But the rat snake is somewhat twisted around the branches so I wonder if when I was dropped it was still partially alive and tried to free itself and could not.????)

Here is how others reacted to the video:

This is gross JC

That's wild! It's a Yellowjacket wasp; not sure it actually stung the snake (based on wasp movements) but snake clearly wanted it gone... very cool!

According to the National Geographic, coral snakes are known for their potent venom that can lead to respiratory or cardiac failure if left untreated. They are extremely reclusive and only bite humans when stepped on or handled, instead preferring to eat lizards, frogs and smaller snakes.