The sea creature was "placed back in the water unharmed." 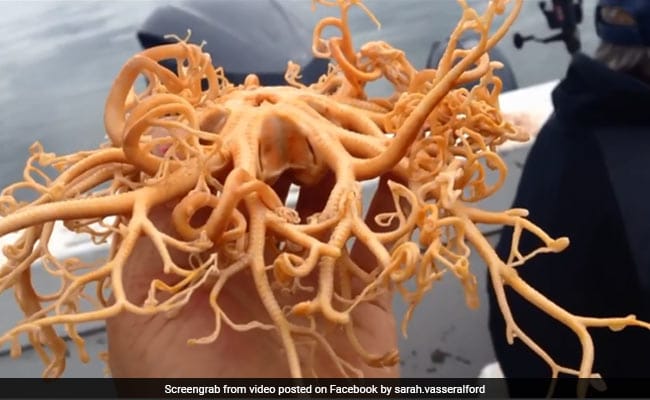 Sarah Vasser-Alford shared a video of the orange sea creature on Facebook.

A video of a mysterious sea creature caught off the coast of Alaska has gone viral on the Internet. Angler Sarah Vasser-Alford reeled in the creature that many have described as "strange" and "alien" about three weeks ago. She shared a video of the orange sea creature wriggling its tendrils on Facebook, where it has collected over 1.1 million views.

According to the Mirror, Ms Vasser-Alford  reeled in the creature from off the coast of Prince of Wales Island, Alaska, in August.

The footage she shared online shows the creature moving its curly tentacles. Blood vessels can be seen when she turns it over. The footage left viewers curious. Take a look at it below:

Along with over one million views, the video has also collected more than 18,000 'shares'.

"Now this is an alien on earth," wrote one person in the comments section. "Live coral?" another wondered. "It's like a starfish with tentacles," a third wrote.

A lot of people also asked Ms Vasser-Alford to put it back in water, while a few identified it as a basket star.

Ms Vasser-Alford later updated the video caption to confirm that the creature was indeed a basket star that was "placed back in the water unharmed."

According to the New York Post, basket stars are a species of echinoderm - similar to starfish - that live on the ocean floor. Their branched arms help them move across the floor and prey on other sea animals.

In March this year, a picture of a rare fish with no eyes and sharp teeth had left netizens puzzled.