This funny incident occurred during the Esmod International Fashion Show, which was organised in 2018. 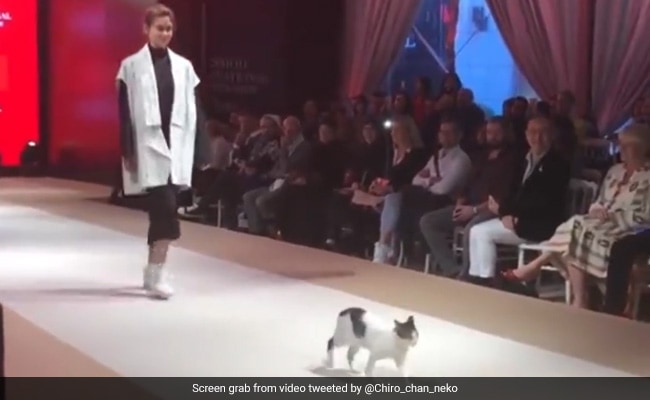 The models also seem friendly with the cat, not getting disturbed while walking the ramp.

An old video doing rounds on the internet shows a unique "Catwalk", with a cat walking the ramp at a fashion show. According to the caption of the video, the fashion show was organised in Istanbul.

This video was originally shared in 2018 but is going viral on social media again. Shared by Twitter user Chiro, one can see the feline gracefully walking the ramp, not really bothered or affected by the models walking on the stage. This funny incident occurred during the Esmod International Fashion Show, which was organised in the same year in Istanbul. It appears from the video that the audience was more excited about the little animal's performance than the fashion show. The models also seem friendly with the cat, not getting disturbed while walking the ramp.

The video was reshared by the Twitter page "Cats With Jobs".

The old video has amassed over five million views and two lakh views. Over one lakh people retweeted this adorable video. It has been captioned as, "catwalk."

"OMG IT ME CAT ON THE CATWALK," commented one user.

A second person said, "Supermeowdel on a catwalk!"

"That cat is there to teach the girls how to catwalk the right way," said a third person.

"Let me show ya how to catwalk, hooman!" commented another person.

Also Read: Study Confirms That You Can Communicate With Your Cat By Blinking Slowly

Recently, a video of a cat imitating an electrician went viral on the internet. In the short clip, the feline can be seen helping a man as it stretches its body to observe the ceiling and later on uses its paw to check the hole in the ceiling with the lighting wires exposed. The man was seen smiling at the feline's antics as he taped the wires.