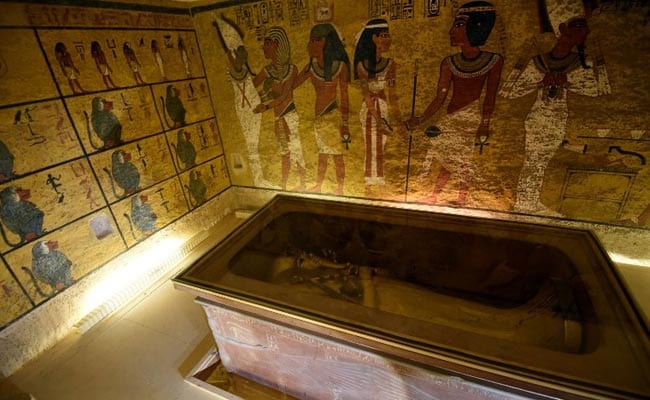 Egyptian king Tutankhamun's tomb is counted among the most famous archeological discoveries ever. While the tomb was unearthed back in 1922 in Egypt's Valley of the Kings, it continues to fascinate researchers. Recently, hidden drawings have been spotted inside the tomb that, according to Egyptologists, support an old theory that Queen Nefertiti is buried concealed in the same place adjacent to her stepson's resting place, reported The Guardian.

In 1922, British archaeologist Howard Carter discovered the 3,300-year-old burial chamber of King Tutankhamun, often referred to as the boy king.

According to Nicholas Reeves, former curator in the British Museum's Department of Egyptian Antiquities, the painting depicting King Tutankhamun's burial by his pharaonic successor, Ay, has been drawn over the cartouches of Queen Nefertiti being laid to rest by the King. Reeves stressed that the original painting showed King Tutankhamun burying his predecessor Nefertiti, wife of King Akhenaten.

The later drawings on the decorated north wall of the tomb show King Ay holding a ceremonial adze and performing the “opening the mouth” ritual on the mummy to restore the five senses of the deceased.

Reeves said that Ay's paintings reveal “clear, underlying traces of an earlier name – that of Tutankhamun”. He added that the original version featured King Tutankhamun performing the funeral rituals for Nefertiti, who, according to her is the King's immediate predecessor and the tomb's original owner.

“This conclusion finds absolute confirmation in the figures' facial profiles – the snub nose and chubby under-chin of the [figure] currently labelled as Ay follow … precisely the standardised facial outline adopted for official representations of Tutankhamun at the very start of his kingship,” Reeves said.

Reeves believes that King Tutankhamun died unexpectedly at a young age and had to be buried hurriedly. Later, he said, the tomb was opened to accommodate the King's cuckoo prince. He argued that going by the recent clues Tutankhamun's tomb could be just the outer section of a much larger tomb “prepared for and still occupied by” Nefertiti.