"Why can this little box only be opened by two? Because that's how consent in relationships works." 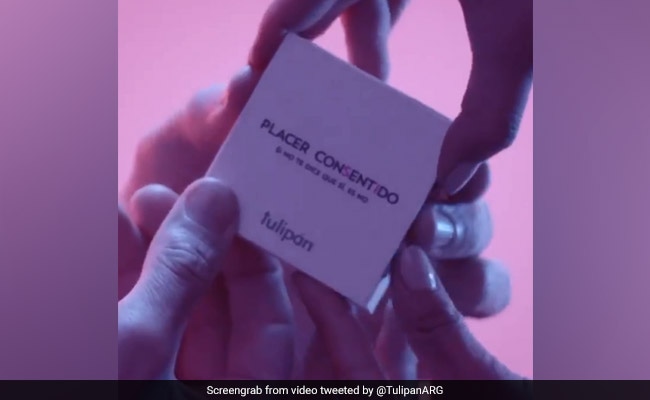 Tulipan Argentina's new consent condoms can only be unpacked by two people together.

It's an old thing in a new package - but it makes an important point about sexual consent. A company from Argentina, named Tulipan Argentina, has come up with a 'consent condom' that requires four hands to open its packaging. Dubbed as the first such product in the world, it needs two people to simultaneously press the sides of the box to access the condom inside.

"Tulipan has always spoken of safe pleasure but for this campaign we understood that we had to talk about the most important thing in every sexual relationship - pleasure is possible only if you both give your consent," explained Joaquin Campins of BBDO, the ad agency responsible for marketing the condom, to The Next Web. "If it's not a yes, it's a no," he added.

Watch how the innovative packaging works below:

Tulipan Argentina has been reiterating its stance on sexual consent through slogans used while sharing the videos on social media. These slogans include "Why can this little box only be opened by two? Because that's how consent in relationships works," and "Only If there is consent, there is pleasure."

As of now, these condom have only been distributed free of charge at events in Buenos Aires. They will be available for purchase later this year, reports Insider.

According to The Next Web, the consent pack was born after a survey revealed that only 14.5 percent of Argentinian men regularly used a condom.