Among other things, Ultima Thule has been compared to a giant space turtle, a fat bowling pin and "Kenny from South Park". 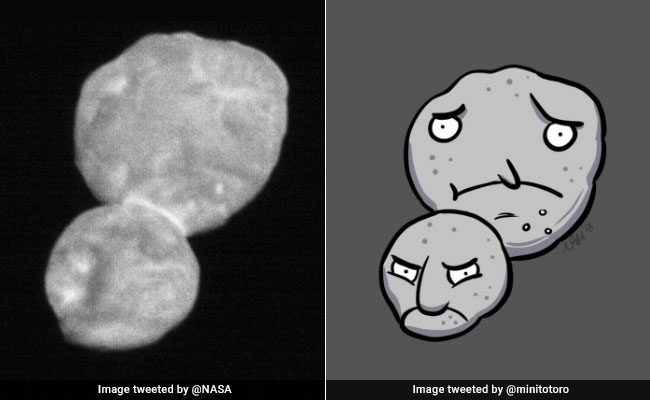 The snowman-shaped Ultima Thule has inspired a lot of jokes and memes.

NASA's New Horizons spacecraft, on the first day of 2019, successfully "phoned home" after a journey to the most distant world ever explored by humankind. The small, icy world, nicknamed Ultima Thule, lies at a distance of 6.5 billion km from earth. NASA's space probe managed to come within 3,540 km of Ultima Thule, a 32-km-long space rock in the Kuiper Belt - a ring of icy celestial bodies just outside Neptune's orbit.

About ten hours ago, NASA shared a picture of the snowman-shaped Ultima Thule on Twitter. The object, which looks like a snowman, has since then inspired a lot of jokes and memes on the micro blogging website.

After flying by the most distant object ever explored, @NASANewHorizons beamed back the 1st pictures & science data from #UltimaThule. This data is helping us understand how planets form — both those in our own solar system & those orbiting other stars: https://t.co/cp8lE03Cl5pic.twitter.com/CUaOK1LZBG

Since being shared, the picture has collected over 5,000 'likes' and almost 2,000 'retweets', along with a ton of comments.

While some have compared Ultima Thule to a snowman, others to a peanut. Take a look at some of the best tweets it has inspired:

Can anyone else see Charlie Browns face in the top section? Looks like he's about to cry.

I'm not the only one seeing this, right? #UltimaThulepic.twitter.com/n6TcKviIGz

Among other things, Ultima Thule has been compared to a giant space turtle, a fat bowling pin and "Kenny from South Park".

Pretty sure #UltimaThule is actually a giant space turtle pic.twitter.com/PUhQl84VJ7

It has also led to a lot of jokes

You know when you open a bag of frozen chicken nuggets and find one stuck to another? https://t.co/3xIEFYJ9qu

I just wanted to say that Ultima Thule sounds like an awesome band name, a last ditch protocol plan, and an epic summoning spell.

Ultima Thule's odd shape indicates that it formed as two spherical rocks slowly fused together in the early days of the solar system. Scientists call it a "contact binary", and it lends support to a theory that suggests worlds are born from slow accumulation, rather than catastrophic collisions.