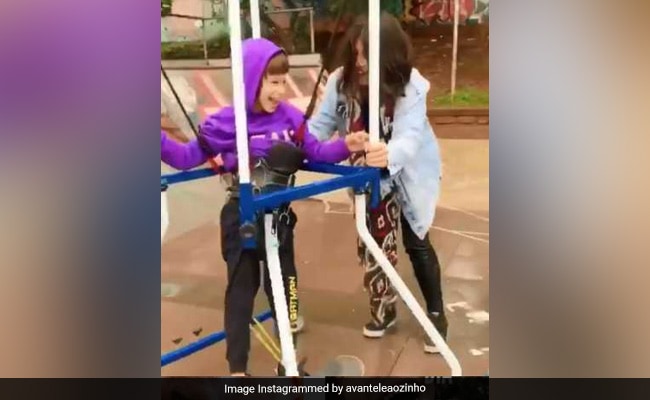 A seven-year-old boy with cerebral palsy skates for the first time in this video.

A heartwarming video that has won the Internet over shows a seven-year-old boy with cerebral palsy skating for the first time. Footage of Joao Vicente and his mother was was recorded at a skate park near their home in Brazil, reports Daily Mail.

In the video, Joao stands on a skateboard made specially for him, with a metal framework to support him. His mother Lau Patron, offers words of encouragement before helping him skate across the park and over a ramp.

Joao is seen grinning from ear to ear in the heartwarming video, happiness showing plain on his face.

The video was originally shared by Ms Patron on Instagram last month. However, it went massively viral online after it was tweeted three days ago, collecting a whopping 18.5 million views.

He has Cerebral Palsy and wanted to skate board so his mom created this for him so that he could.

Mother Of The Year pic.twitter.com/S97bk8jBAS

Since being shared online, the video has collected a ton of warm responses. Another version of the video, shared by Rex Chapman, has collected 3 million views on the microblogging website.

According to Metro, Joao suffered a stroke when he was a year and eight months old. He had always wanted to skate, which is why his mother set out to find a skateboard that would work for him.

Joao's dream was fulfilled when his mother managed to procure a specially adapted board that was created by a physiotherapist and psychologist through a project called Skate Anima.

"My son is 7 years old. He is a boy full of wills, desires, dreams, and one of them was, for a long time, skateboarding," Joao's mother wrote on Instagram, thanking Skate Anima for their special skateboard. "You deserve the world," she added.