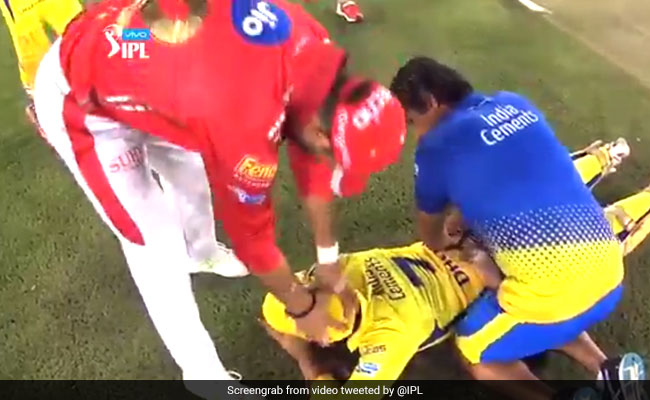 "Best moment," comments one Twitter user on the video.

MS Dhoni's incredible performance - despite a bad back - during Sunday's match between Chennai Super Kings and Kings XI Punjab has all cricket and IPL lovers impressed. CSK may not have won the match but Dhoni's 79 not out off just 44 balls has definitely won hearts on Twitter. However, that's not all Twitter's been talking about from yesterday's match. A heartwarming moment between the former India captain and cricketer Yuvraj Singh has tweeple all nostalgic.

Posted on Indian Premier League's official Twitter account, the moment shows the 'old bromance' between the two players. The barely five-seconds-long video shows Yuvi affectionately squeezing Dhoni's head while the latter received medical attention from the CSK physio after suffering a back injury during the match.

Since being posted some 15 hours before writing this, the video has received almost 9,000 'likes' and more than 1,800 retweets - and still counting.

"Best moment," comments one Twitter user. "I just love this moment. Happy to see you both together," says another.

Meanwhile, Yuvraj Singh and MS Dhoni's better halves Hazel Keech and Sakshi Dhoni indulged in some off the field camaraderie. Hazel even posted some pictures the two clicked together along with Dhoni's daughter Ziva.

Can't wait for more such moments from this IPL.Click for more trending news