Over 4 million views for this video - and counting. 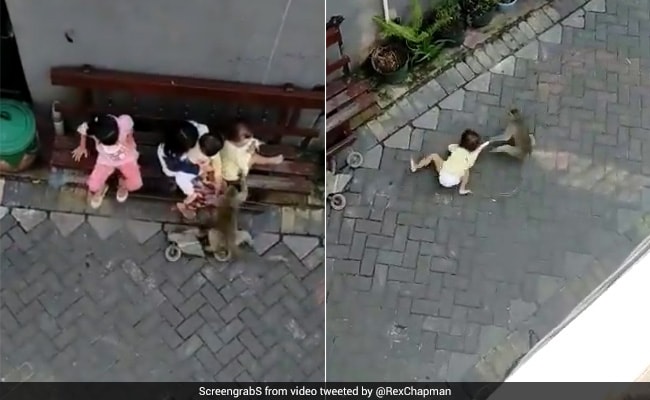 A viral video shows a monkey dragging a toddler down a road.

A shocking video that is going viral on social media shows a monkey on a bicycle grabbing a toddler and attempting to drag her down the road. Footage of the incident, which has been dubbed a 'kidnapping attempt' online, shows the toddler sitting on a bench when the monkey appears riding his bike at full speed.

On reaching the bench, the monkey abandons his bike and jumps at the young girl, toppling her over and grabbing her dress. He then dragging her down the road. The video appears to show the monkey being pulled by a leash around its neck as he drags the little girl with himself. In the end, the monkey lets go of the toddler, who immediately gets up and brushes herself off before walking back to where she was sitting.

The video was shared on Twitter by retired American basketball player Rex Chapman. "Can't remember the last time I saw a monkey ride-up on a motorcycle and try to steal a toddler. It's been ages..." he wrote while sharing the footage.

Can't remember the last time I saw a monkey ride-up on a motorcycle and try to steal a toddler. It's been ages...pic.twitter.com/PBRntxBnxw

The video has been viewed nearly 4 million times on the microblogging platform since being shared only a few hours ago. It has also collected nearly 16,000 'retweets' and made its way to other social media platforms like Reddit.

Viewers were left shocked by the incident:

What the hell did I just watch?! pic.twitter.com/MvAg4emxdd

We are surely living in strange times????
Broad daylight kidnapping attempt by monkey......

Some tried to come up with explanations for what they saw:

Looks like the monkey was on a leash and was attacking the kid.
The owner was then pulling the leash which led to the kid being dragged with the monkey.

"OK so what really happens is those monkeys get put on a toy bike (that doesn't have an engine) and a collar with a rope on it. The owner then yanks the cord so the monkey flies from one end of the street to the other while steering," explained a Reddit user. "Pretty cruel and that's probably why the monkey is so strung out. You can see the owner trying to pull back on the cord and he pulls the monkey while it hangs on to the kid, and in the start yanking the cord to propel the bike."