Meet The Winner Of This Year's 'World's Ugliest Dog Contest'

"He's Scamp the Champ, no longer Scamp the Tramp," says his owner 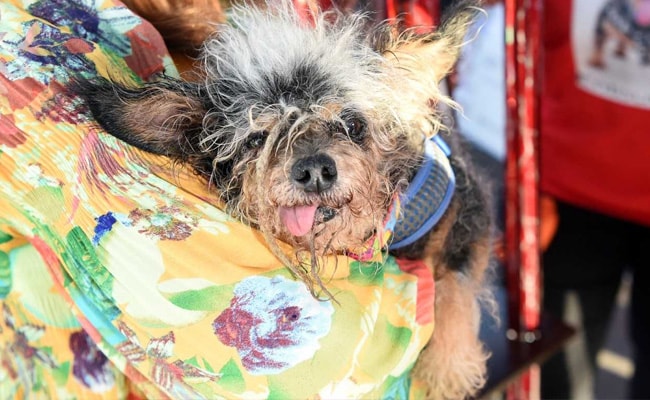 The winner of this year's World's Ugliest Dog Contest is a dog of "unknown breeding" with an "extremely round body", named Scamp the Tramp. The New York Times describes Scamp as a dog with "beady eyes, no teeth and short stubby legs" - all features that helped him to his big win on Friday at the Sonoma-Marin Fair in Petaluma, California.

Yvonne Morones, Scamp's owner, tells The New York Times that she found Scamp on Petfinder in 2014.

"I ran across Scamp's photo and it was just like Tinder for dogs," she said. "I swiped right and fell in love with that face."

To become the world's ugliest dog, Scamp beat 18 other contestants. A Pekinese named Wild Thang came second, while a Chihuahua named Tostito took the third place. As the winner, Scamp received a large trophy, a cash prize of $1,500 and an appearance on the Today show, reports ABC News.

But being crowned the world's ugliest dog is not his only achievement. Scamp also has a lengthy and impressive resume, which includes being a social therapy dog and a reading dog for a first-grade class, representing the Humane Society of Sonoma County in a kissing booth at events and greeting passengers at the Sonoma County Airport.