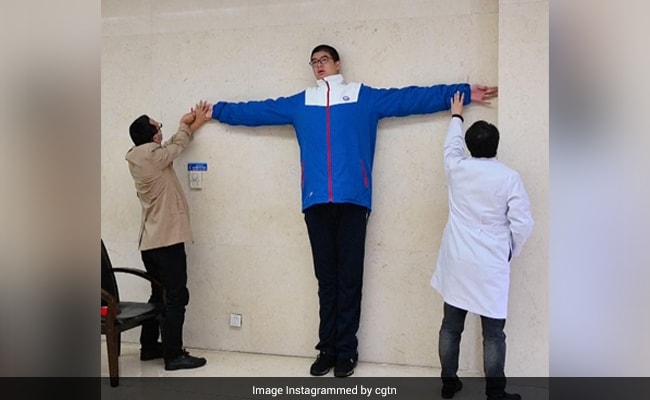 Ren Keyu has always towered over his classmates. At seven feet and three inches, the 14-year-old from China has become the world's tallest male teenager.

According to CGTN, Ren Keyu is a junior high school student from the city of Leshan in southwest China's Sichuan Province.

He was confirmed as the world's tallest teenager (male) after Guinness World Records published the result on their website. The measurement process was carried out back in October, when a Guinness official visited Ren at his home.

"Ren Keyu measured a staggering 221.03 cm," Guinness World Records wrote in a statement published on their website, confirming that the student now holds the record for the tallest male under the age of 18 years.

According to The Sun, the teenager is so tall that he had to have special furniture made so he could fit into his study.

"Since I have entered school, I have noticed that I am taller than the other kids at my age," he said.

"Many students were mistaking me as a fellow from the senior generation. That did disturb me but I decided to make it something positive by applying to Guinness to see if I could get the world record."

The record for the world's tallest male teenager was previously held Kevin Bradford of the USA, who was over 5 cm shorter than Ren in his teenage years.

Gujarat Forest Staff Find Lion Cub In Net, Risk Their Lives To Save It. Watch