"To buy me my first ever fencing kit, Mumma sold her jewellery worth Rs 6,000," said Bhavani Devi 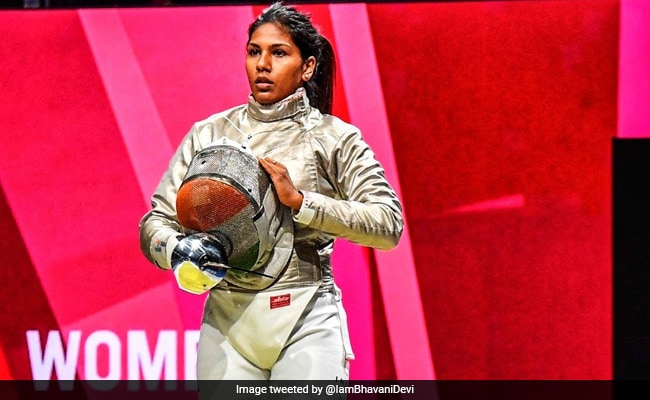 Bhavani Devi took to Twitter after her Olympic exit to say she would continue training.

Chadalavada Anandha Sundhararaman Bhavani Devi, simply known as Bhavani Devi, made history by becoming the first fencer from India to ever qualify for the Olympics. Although her Olympic debut ended with a second round defeat in the women's individual sabre event, the 27-year-old from Chennai, Tamil Nadu, has earned much praise for her performance during the Games. But praise and recognition have come to Bhavani Devi after years of struggle, as she revealed in an interview with 'Humans of Bombay'. There was a time when India's lone representative at fencing in the Tokyo Games could not afford to participate in a tournament abroad, despite already being first Indian fencer to ever win silver in the Asian Championships. That's when late Tamil Nadu Chief Minister J Jayalalithaa had stepped in to cover her expenses for the tournament, Bhavani Devi revealed.

In her interview with Humans of Bombay, the fencer spoke about this incident and much more. "I was 11 years old when I had to select a sport as an extracurricular activity in school. Fencing was the one least chosen by my classmates, but it sounded unique, so I signed up for it," she said.

Bhavani Devi recalls that her parents were one hundred per cent supportive of her interest in the sport, even though it was "too unknown to be taken seriously."

"To buy me my first ever fencing kit, Mumma sold her jewellery worth Rs.6000. My parents would spend hours in various offices trying to help me find sponsors for my training and competitions abroad," she said.

Seeing her family struggle financially, Bhavani Devi was conscious of the fact that she would be letting them down if she lost at her sport of choice - but she did lose frequently at the beginning of her career, because she needed a mentor. "Thankfully, I was spotted at a tournament by a coach, who agreed to train me!" she said.

With the help of her coach, she was able to win gold at the Under-17 national championships. Even so, Bhavani Devi says she almost gave up fencing in 2013, because the cost to participate in tournaments was way beyond her family's means. At that time, they had already taken a loan of Rs 10 lakh. But her mother's faith in her kept her going - and she trained harder and harder until she became the first Indian fencer to win silver in the Asian Championships in 2014.

"Still, as time passed, I needed more support; it was a constant struggle," she remembered.

"I remember, once, when my parents couldn't pay for me to participate in a tournament abroad, I wrote to CM Jayalalithaa ma'am requesting for help. She invited me to her home and offered to cover my expenses. I felt like luck was finally on my side!" the fencer revealed.

"And after all the trials and tribulations, this year, I got the best news- I qualified for the Tokyo Olympics and became the first Indian fencer to do so!" said Bhavani Devi.

Recently, after winning a championship, the was also able to repay the Rs 10 lakh loan. " I could see the relief on my family's face. I'm even planning to surprise my family by buying them a home," she said.

Bhavani Devi got off to a winning start in the women's individual sabre in the Tokyo Olympics at Makuhari Messe B Hall Yellow Piste. Bhavani overpowered Tunisia's Nadia Ben Azizi by 15-3 in just 6 minutes and 14 seconds. However, she was knocked out after losing to France's Manon Brunet in the Table of 32 match.

Every end has a beginning, I will continue my practice and definitely work hard to win a medal at the next Olympics in France and make my country proud.
I want to thank each one of you who stood by me.

Bhavani Devi took to Twitter after her exit from the Tokyo Games 2020 to say she would continue training for the 2024 Olympics. "I won the first match 15/3 against Nadia Azizi and become the first Indian fencing player to win a match at Olympic but second match I lost 7/15 against world top 3 player Manon Brunet," she wrote. "I did my level best but couldn't win. I am sorry," she said, adding that she would continue to practice hard to win a medal at the next Olympics. "Every end has a beginning, I will continue my practice and definitely work hard to win a medal at the next Olympics in France and make my country proud," she wrote.