Some spectators described the scene as "apocalyptic". 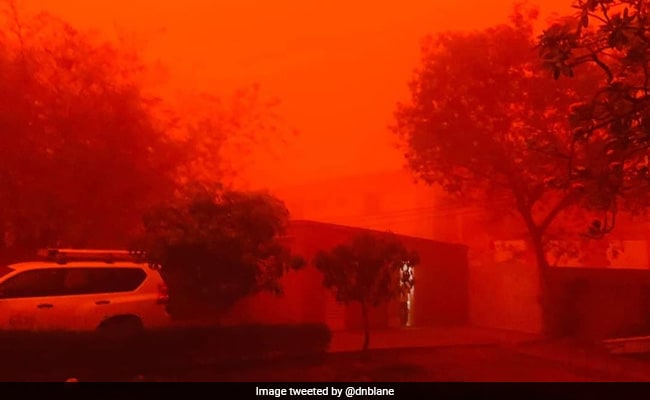 The sandstorm painted the sky red.

Dramatic photos and videos going viral on social media have captured the moment a massive sandstorm swept over the capital of Niger on Monday. One video, which is being widely shared online, shows a huge wall of sand engulfing buildings in Niamey. Other posts show a sky painted red by the storm that some spectators, according to The Express, described as "apocalyptic".

Dust-laden winds and sandstorms are common across West Africa during the dry season, which typically lasts from January till April. The season is known as the "Harmattan". The sandstorms occur when thunderstorms lift a large amount of dust into the air, which can then travel hundreds of kilometers.

A video which is going viral on Twitter shows a huge 'wall' of sand taking over the city. It is simply captioned "Sandstorm in Niamey ...".

Since being posted on Monday, the video has been viewed over 1.5 lakh times on the microblogging platform. It has also collected a number of amazed comments, with one Twitter user describing the sight as "utterly terrifying".

Another video to emerge from the city shows the sky darkening with reddish dust.

One Twitter user shared incredible photos of the sky in Niamey taking on a crimson hue because of the storm.

Incredible photos from Niamey in #Niger today, where my brother and his family live. Sandstorms turning the sky orange/red pic.twitter.com/Rpqu0XGVP2

Another Twitter user said that she had never seen anything like the sandstorm before while sharing a video which shows the sky blood red in colour.

According to reports, the lasted a few minutes and also caused air traffic to stop temporarily.