Social media is amused by a video of a man who claims to have built an army of over a million frogs in his garden who initially posted on TikTok. 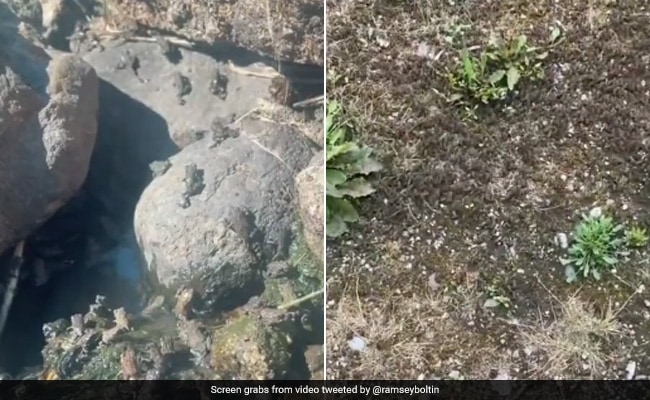 The tadpoles have grown into young frogs totally covering the man's backyard.

Social media is amused by a video of a man who claims to have built an army of over a million frogs in his garden. The user initially posted videos about his journey on TikTok, but the clips later appeared on YouTube and other social media platforms as well.

Using the handle @thinfrog, the man said he now has an army of 1.4 million frogs. In the video, the man talks about rescuing a whole load of frogspawn, and watching over their growth from tadpoles to full-fledged frogs.

Frog army on TikTok. This guy is creating an entire frog population (1m) in his backyard. It's honestly crazy. https://t.co/TaKkAlNUM0pic.twitter.com/h0mZrxXM16

In the viral video, the man is first seen releasing the frog's eggs into a water body, which turn into tadpoles. The user then demonstrates how the tadpoles have grown into young frogs and totally covered his backyard.

"95 days ago, I rescued 1.4 million frog eggs and put them in pond for a frog army. And now they are leaving the pond, a million little frogs are hopping around the garden. I don't think I can walk on the grass anymore. This is the biggest frog army ever, but I kind of regret this now," he is heard saying in the video.

"No one can go in the garden, the full garden and the neighbors are taken over by millions of baby frogs. And there is still about half a million tadpoles follow to see the giant frog army grow. This was successful," he further says.

The video has received over 2.8 lakh views on Twitter, where it has been shared by Ramsey Boltin. Many users are concerned about the man's little experiment.

"The frog population enjoying itself and That one guy about to cause an ecological disaster via 1,000,000 tadpoles."

"When I was a kid, I used to always be mad our lakes (KY) didn't have gators and dreamed of doing this. Glad I never did though," a user wrote.