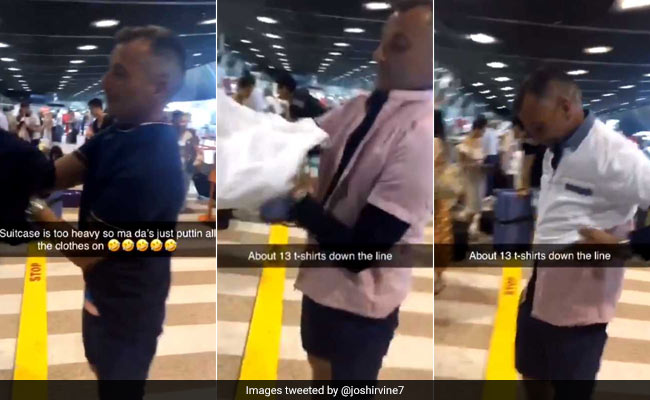 The hilarious moment a man put on 15 shirts to avoid paying excess baggage fee at an airport was captured on camera by his son. John Irvine decided to wear eight kilograms of clothing to bring down the weight of his luggage and avoid coughing up 96 pounds, reports Daily Mail. The 46-year-old from Scotland has now gone viral for his stunt.

The video taken by his son Josh shows him putting on layer after layer of clothing in front of a bemused audience at Nice Airport, France. The video was shared on Twitter, where it has garnered over 7 lakh views and a ton of amused comments.

Josh told the Mirror his father is a bit of a "comedian" and was making the airline staff laugh. "He'll try anything."

Wearing 15 layers of clothing, however, made John Irvine look slightly suspicious to security staff, says his son. "They told him to take off some tops, and he kept taking them off because they were wondering what he was hiding."