Wait for the twist at the end 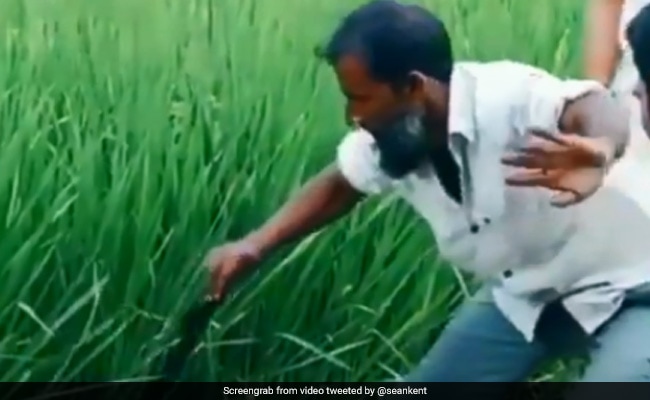 A man pulls a 'snake' out in this dramatic video.

A dramatic video with a surprise ending has taken social media by storm, collecting millions of views. The video shows a man trying to capture a 'snake' from a grass field - a tense situation that ends with a hilarious twist.

In the video, the man is seen crouching down and extending his hand cautiously towards the tall grass that covers the field. With his other hand, he keeps two onlookers at a distance, waving them aside at one point as if the situation is dangerous.

A few seconds later, he pulls out a long black object from the grass. At first glance, it appears to be a snake. Then, the man calmly ties it around his waist and the 'snake' is revealed to be a belt, much to the chagrin of the two onlookers.

The video was shared on Twitter by Sean Kent Comedy on Sunday. In just one day, it has garnered over 2.8 million views - and the number continues to grow. It has also received hundreds of amused comments.

hated it for a second, because I do not f$&% with snakes, but the end was oddly satisfying

This is not the first time a misidentified snake has amused social media users. Just a few days ago, a woman shared a picture of a 'snake' that made her scream. It turned out to be something quite different.