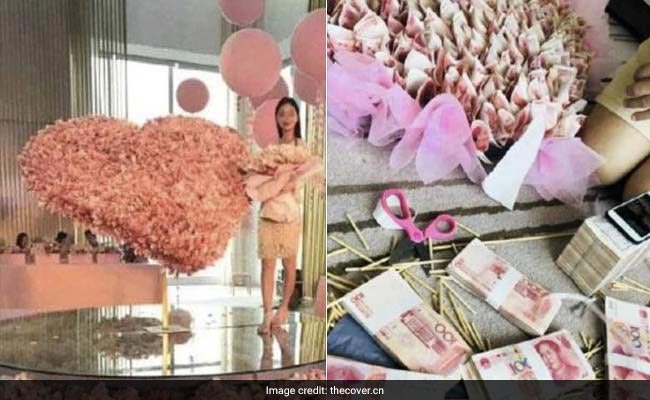 It took seven employees from a flower shop around 10 hours to create the bouquet.

You may have seen desi grooms wearing garlands of currency notes around their necks during weddings several times. But how often do you see a bouquet of currency notes? Well, that's what one man in China decided was the perfect gift for his girlfriend. It's said love makes the world go round... guess money would come a close second.

Pictures circulating on Chinese social media show a woman standing next to her rather expensive gift at a fancy hotel room in Chongqing. According to reports, the love-struck man used nearly 330,000 yuan (approximately Rs 35,70,000) in cash to create grand present. But hey, you can't really put a price tag on love, can you?

The woman's birthday was reportedly on May 16 and the man wanted to gift her the bouquet on the occasion. It apparently took seven employees from a flower shop around 10 hours to create the special bouquet.

Promoted
Listen to the latest songs, only on JioSaavn.com
Pictures of the bouquet have not only created something of a stir online but also attracted the attention of the authorities. A representative of the People's Bank of China has said the man may have broken the law by causing damage to China's currency, reports Shanghaiist.

While it's not clear right now if the man landed in any real trouble, we sure hope his girlfriend was happy with the grand gift he got her. After all, it may end up costing him more than just the 330,000 yuan.Click for more trending news