According to local reports, officials in the Kemerovo region said the red-coloured water was from a blocked drain 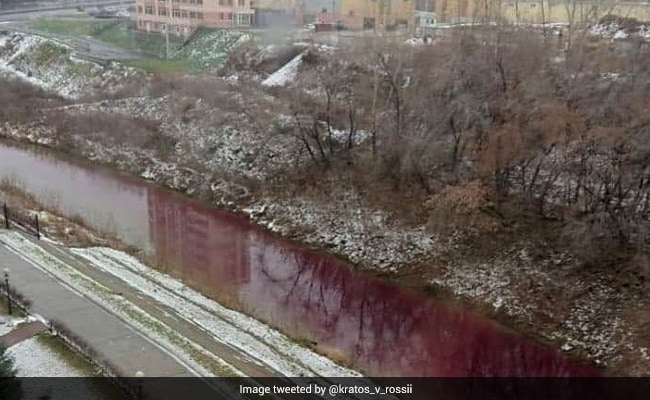 A river in Russia has turned red.

A river in Russia has turned beetroot red, horrifying locals. According to the Daily Mail, Iskitimka River is reportedly one of several rivers in the country that have undergone a mysterious discolouration. The colour change has been attributed to contamination by a mysterious pollutant.

Iskitimka River is located in the south of the country. Its change in colour has stunned locals in the industrial city of Kemerovo, who have noticed ducks refusing to enter the water.

Photos and videos shared on social media show the water of Iskitimka River turned into an unnatural red.

Resident Andrey German said: "There are no ducks in the river, all are on the bank."

Another social media commenter noted that the water looked toxic.

According to local reports, officials in the Kemerovo region said the red-coloured water was from a blocked drain, adding that their teams were working around the clock on the issue.

However, it is not yet clear what chemical caused the alarming discolouration. "The city storm drainage system is a possible source of contaminated water," said deputy governor Andrei Panov of Kemerovo.

It is also not clear whether the chemical poses a risk to human health.

This is not the only river in Russia to have turned red of late. Recently, a river in Naro-Fominsk in western Russia also turned red after a chemical release, as did Gvozdnya River earlier this year. Locals said they were not provided with any details about the cause of the pollution.