Some identified the lightning as rare volcanic lightning - an electrical discharge caused by a volcanic eruption, rather than from an ordinary thunderstorm. 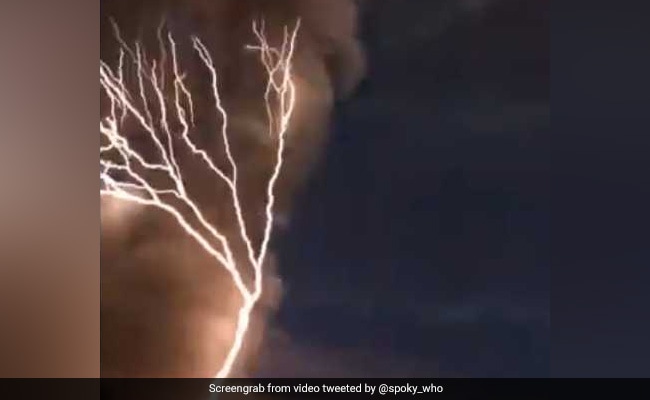 Videos show lightning over the Taal volcano after it erupted.

Videos shared on social media show lightning illuminating the smoke and ash spewed by the Taal volcano in Philippines. The volcano, located south of the Philippine capital of Manila, erupted on Sunday, sending clouds of ash across the city.

The eruption began with an explosion of superheated steam and rock, but by early Monday "fountains" of lava had been spotted on Taal, the Philippine Institute of Volcanology and Seismology (Phivolcs) said. The eruption sent a massive plume of ash and steam into the air. Fine grit weighed down trees and turned roads into muddy messes across the region, forcing over 20,000 people to seek refuge in evacuation centres, a provincial governor said.

Taal is a tourist attraction that sits in a picturesque lake, yet is also one of the most active volcanoes in a nation where earthquakes and eruptions are a frightening and destructive part of life.

On Sunday evening, a Twitter user shared a timelapse video of lightning swirling around the volcano as it continued to send clouds of smoke and ash into the air. The dramatic video has been viewed over 1.4 million times on the microblogging platform.

In the comments section, some identified the lightning as rare volcanic lightning - an electrical discharge caused by a volcanic eruption, rather than from an ordinary thunderstorm.

Another video of the Taal volcano also shows bolts of lightning shooting into the sky, set against the backdrop of billowing smoke. "I captured this moment just the right moment," wrote the Twitter user who posted the video on Sunday.

I captured this moment just the right moment stay safe especially to those leaving nearby taal volcano pic.twitter.com/x612dgF2L8

The Philippines sits on the Pacific "Ring of Fire", where tectonic plates collide deep below the Earth's surface.