The hilarious video has collected a ton of amused comments 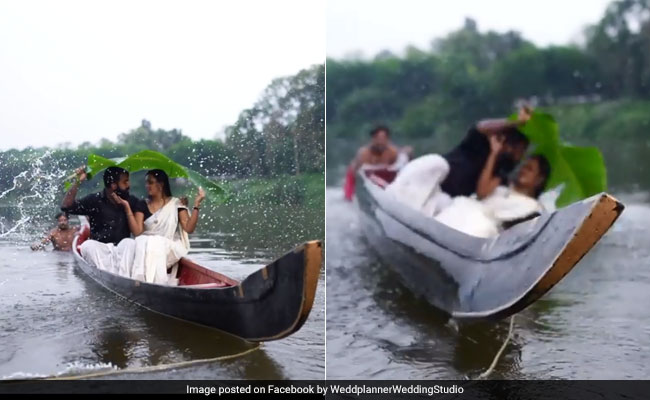 Tijin and Silpa's wedding shoot ended with them in the water.

Wedding photographers are known to go above and beyond when it comes to giving couples the perfect photographs before their big day. After all, who can forget the dedicated photographer from Kerala who hung upside-down from a tree just to get that perfect shot? Now, another wedding photoshoot from Kerala has gone viral - albeit for a slightly different reason. A video that has been shared widely online shows a couple sitting in a canoe fall into the river during their wedding photoshoot.

The hilarious video was shared online by Weddplanner Wedding Studio. In the video, the couple - Tijin and Silpa - sit on a canoe and pose for photographs near the bank of the Pamba River. Holding a leaf over their heads, they gaze romantically at each other's eyes - when suddenly they lose balance and fall into the river.

A spokesperson for Weddplanner Wedding Studio confirmed to NDTV that rocking the boat was the studio's idea, though the couple did not know about it.

"It was a sudden idea from our head, Roy Lawrence, the chief photographer and owner of the studio. Our team planned it just at the time of shoot without letting the couple know," they told NDTV.

Since being shared online on Monday, the video has collected over 2-lakh views on Facebook alone, along with a ton of amused comments.

"Superb plan," wrote one person in the comments section. "Hilarious," said another.

And as for the couple - they loved the idea, even if it ended up with them in the water. "They enjoyed a lot. They are super excited now," Weddplanner Wedding Studio told NDTV.