Dismissing Jeff Bezos as "just another middleman", the story read: "The idea that Amazon CEO Jeff Bezos has pioneered a new business paradigm is silly." 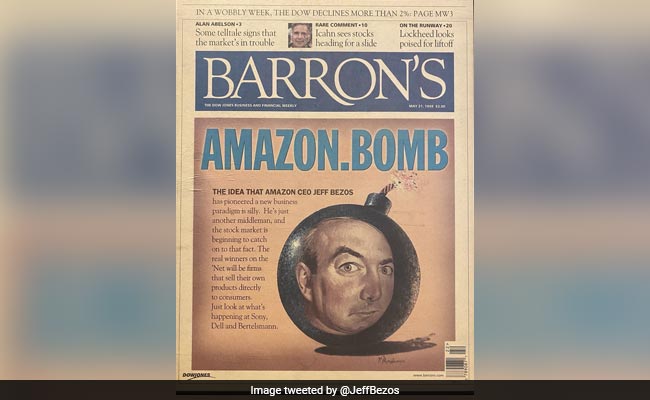 In 1999, news magazine Barron's predicted that Amazon's stock would come crashing down

In 1999, American magazine Barron's published a cover story titled "Amazon.bomb". The story predicted that Amazon's stock price would come crashing down and that the real winners of the Internet boom would be "firms that sell their own products directly". Dismissing Amazon founder Jeff Bezos as "just another middleman", the story read: "The idea that Amazon CEO Jeff Bezos has pioneered a new business paradigm is silly."

It's safe to say the article did not age well. More than two decades later, Amazon is worth $1.6 trillion in market cap and Jeff Bezos is counted among the world's richest people. Mr Bezos took to social media today to share the Barron's cover story with an inspirational message.

"Listen and be open, but don't let anybody tell you who you are," he wrote. Mr Bezos added that the story was just one of many that predicated Amazon's failure. "Today, Amazon is one of the world's most successful companies and has revolutionized two entirely different industries," he concluded while sharing a picture of the 1999 article.

Listen and be open, but don't let anybody tell you who you are. This was just one of the many stories telling us all the ways we were going to fail. Today, Amazon is one of the world's most successful companies and has revolutionized two entirely different industries. pic.twitter.com/MgMsQHwqZl

Jeff Bezos's post on Twitter has gone viral with over 13,000 'likes'. While many in the comments section praised the Amazon and Blue Origin founder for his vision, most of the attention was focused on a comment from his longtime business rival, Elon Musk.

Elon Musk, CEO of SpaceX and Tesla, simply responded to the tweet with a silver medal emoji. For the uninitiated, Mr Musk surpassed the Amazon boss as the world's richest person last month and took a celebratory crack at him by telling Forbes in an email that he would send Jeff Bezos a silver medal for becoming the world's second-richest person. "I'm sending a giant statue of the digit '2' to Jeffrey B., along with a silver medal," Elon Musk wrote in his short email.

The deeper the doubts, the sweeter the success. https://t.co/dgrbu6yB3d

Meanwhile, here is a look at some other reactions to Jeff Bezos's post:

Congratulations on all of the ingenuity and hard work you put forth to make Amazon the success that it is…I can't imagine the sacrifices that you had to make to achieve this type of success - bravo!

Now that's a quote I have to follow by every day!

Lot of similarities with what's has been going on with #Tesla for the past decade.

Jeff Bezos stepped down as Amazon's CEO in July this year. Under him, Amazon went from being an online marketplace for books to the world's largest e-commerce company.