Ivanka Trump Opened A Can Of Memes With This Pic

"If it's Goya, it has to be good," tweeted Ivanka Trump. 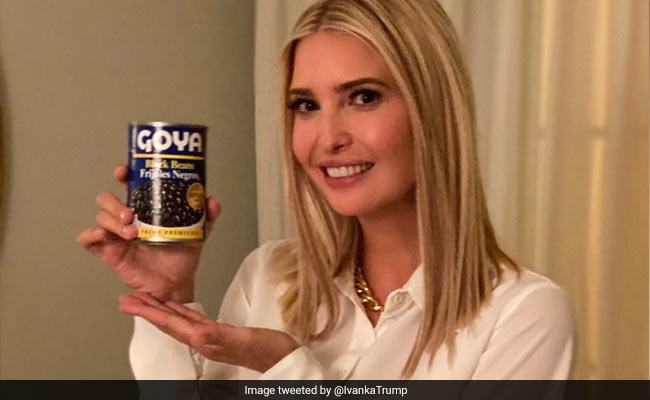 White House adviser and US President's daughter Ivanka Trump took to Twitter on Tuesday to share a picture that shows her holding a can of beans in support of Goya Foods - the company that became the target of a social media boycott campaign sparked by its CEO's effusive praise for President Donald Trump. According to ABC News, Goya Foods is a brand that is popular among USA's Latino community and is the largest Hispanic-owned US food company. Last week, its CEO Robert Unanue attended an event with Mr Trump and praised the US President by saying: "We're all truly blessed at the same time to have a leader like President Trump who is a builder, and that's what my grandfather did."

His comments sparked backlash from a number of Americans who consider Mr Trump's policies racist and discriminatory towards the country's Hispanic population. As the backlash grew, Mr Trump's daughter, Ivanka Trump, took to social media to speak out in support of Goya Foods.

"If it's Goya, it has to be good," Ms Trump tweeted the company's slogan in English while sharing a picture that shows her holding a can of Goya beans.

If it's Goya, it has to be good.
Si es Goya, tiene que ser bueno. pic.twitter.com/9tjVrfmo9z

Her picture, which has collected over 65,000 'retweets' and comments on the microblogging platform, opened a metaphorical can of worms for the White House adviser. Many accused her of using her position to promote a brand - something that goes against government ethics rules.

A number of Twitter users made their displeasure known with the help of memes. Take a look:

US Congresswoman Alexandria Ocasio-Cortez, who is also Hispanic and a vocal critic of the President, responded to the tweet by writing, in Spanish: "If it's Trump, he has to be corrupt."

According to news agency Reuters, Ivanka Trump's picture could be in violation of government ethics rules prohibiting the use of public office to endorse products or advance personal business gains. The White House, however, blamed "cancel culture" for the criticism she received in a statement issued Wednesday.

"Only the media and the cancel culture movement would criticize Ivanka for showing her personal support for a company that has been unfairly mocked, boycotted and ridiculed for supporting this administration - one that has consistently fought for and delivered for the Hispanic community," White House specialty media director Carolina Hurley said in a statement.

White House adviser Kellyanne Conway was criticized in 2017 after she appeared to break similar federal ethics rules when she said on television that Americans should "go buy Ivanka's stuff."