Iron Man Owes Captain America A Kiss On The Cheek. Not The Cheek You Think

"The world's a better place, and I owe you a kiss on the cheek!" wrote Robert Downey Jr 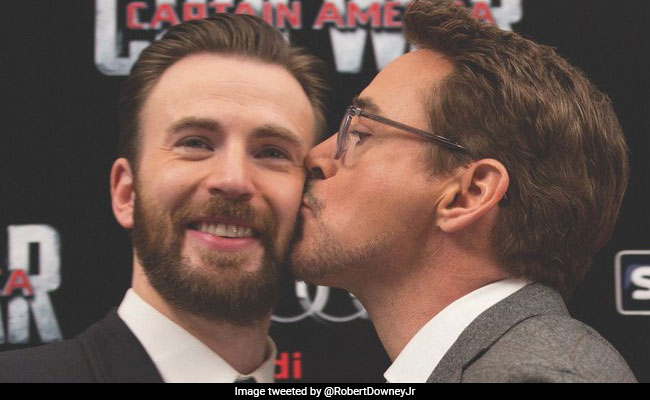 Robert Downey Jr wished Chris Evans on his birthday with a hilarious tweet.

Fans will be pleased to see that even after Endgame, the social media banter between Marvel Cinematic Universe stars hasn't died down. On Chris Evans' 38th birthday on Thursday, his 'Avengers: Endgame' co-star Robert Downey Jr wished him with an especially 'cheeky' message.

"Happy birthday to America's a**," the actor behind Iron Man wrote on Twitter, sharing a GIF from the latest Marvel film. "The world's a better place, and I owe you a kiss on the cheek!" he added.

In the GIF, Captain America, played by Chris Evans, looks down at a past version of himself in the aftermath of 2012's Battle of New York. Acknowledging Ant-Man's compliment from a few scenes earlier, and referring to a running joke in the movie, he agrees, "That is America's a**."

Happy birthday to America's ass. The world's a better place, and I owe you a kiss on the cheek! @ChrisEvanspic.twitter.com/iCFRSu0DIH

The hilarious birthday wish was acknowledged by the Cap with a blue heart:

The 'America's a**' line from 'Avengers: Endgame' is one of the series' most famous, inspiring a ton of memes.

Meanwhile, it wasn't just Iron Man who wished Captain America on his birthday. Mark Ruffalo, aka The Incredible Hulk, also shared a sweet message for Chris. "Love you, Bro. Always there when you need him," he wrote, sharing a selfie from a movie set.

Happiest of birthdays to the fantastic @ChrisEvans 🥳🎂 Love you, Bro. Always there when you need him. Wishing you all the best today! pic.twitter.com/WJT2kbudN5

To this message, Chris Evans responded with another heart emoji - this time fittingly green.

What do you think of these birthday wishes? Let us know using the comments section.