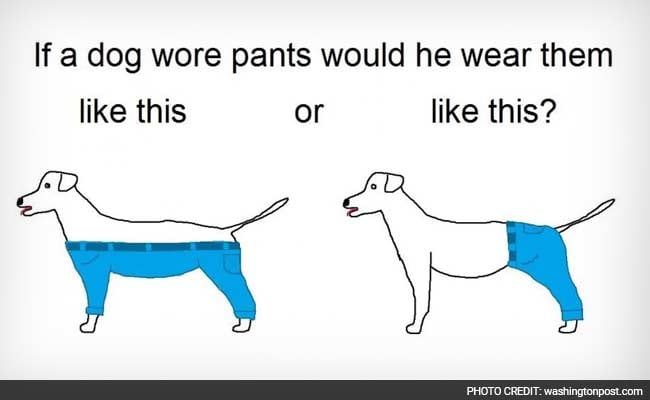 The last big meme of 2015 will probably be an argument about how a dog should wear pants, brought to the attention of the Internet at large via an image swiped from Facebook, posted to Reddit and tweeted by a social media guy who has described his current Twitter mentions as a "war zone."

I don't personally want to argue about how a dog would wear pants (because it is so obviously the second way; the other pants look like a diagram of a dog-shaped iceberg above and below water), but apparently many many people on the Internet would like to do just that - passionately, and at length. If you thought we left The Dress behind us as 2015 comes to a close, think again, because here comes the dog in pants.

Anyway, a little bit about how we got here. The dog pants image was first posted to the Facebook page for Utopian Raspberry - Modern Oasis Machine(do you get it?), from which it was promptly "borrowed" by other Facebook pages, eventually seeping out of that network and into Reddit and Twitter - where it really took off.

Jared Keller, who works at Maxim, gets the credit/blame for bringing the image to Twitter and for first confirming the origins of dog pants.

In a Facebook messenger conversation with The Intersect, a page admin identifying himself as "Norbert K.," a 19-year-old in Belgium, said he made the drawing because he "saw a dog wearing pants as it's shown in the second drawing" and thought, perhaps, there may be another way for dogs to wear pants.

"I thought that pants are a human invention so for us it's normal to wear them like that. But dogs have 4 legs so technically, their pants should go on each leg," he argued.

"I made [the drawing] for this page so people can give their opinion," he added, "I really didn't expect it to become viral."

Norbert was a little surprised to discover that most people (correctly, in The Intersect's opinion) favor the second image, of the dog wearing pants just on the back two legs. Ultimately, he said, he's "quite neutral" on the issue himself, and is mainly curious about what other people think.

In other words, Norbert appears to be the only person on the Internet capable of discussing how a dog should wear pants without losing their entire mind.

"I'm amazed about how quick things go viral," he added. He made the image and posted it at about 3 am Belgium time. It was all over Twitter just two hours after his original Facebook post went live. What a world.