How Much Dowry Are You Worth? Shaadi.com is Telling You 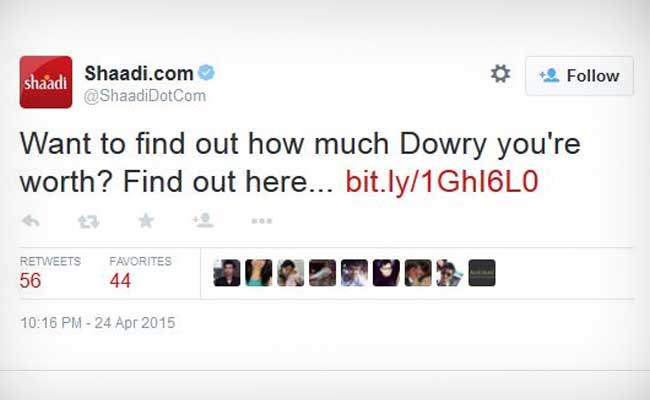 The tweet invites the user to find out how much dowry he, yes he, is worth. She can click too though on to a form where the options are not gender specific. Shaadi.com asks to record your age, profession, salary, education etc.

Prospective grooms do note though (spoiler ahead:) the answer is always the same. 91202.

The matrimonial site has launched an innovative campaign against dowry and claims that "154 out of the 195 countries around the World have played our anti-dowry game."

154 out of the 195 countries around the World have played our anti-dowry game http://t.co/MbWoczr6Wf Have you?? pic.twitter.com/wX0NPZq25A

Shaadi.com ends with an appeal, "Let's make India a Dowry-free society. Be the change. Make a difference."

Shaadi.com's Facebook post on the 'anti-dowry game' has received 16,695 'likes', and has been shared 136 times since the time it was posted in April. On Twitter, it was retweeted nearly 500 times.

Want to find out how much Dowry you're worth? Just click on the link..

Designed to shock, Shaadi.com's tweet drew the curious and the livid.

The outraged soon smiled and many have congratulated the matrimonial site for coming up with a brilliant campaign.

Just when I wanted to launch into a vitriol over this nonsense, .@ShaadiDotCom actually pleasantly surprises me :) https://t.co/9HOjJAT4S6

@ShaadiDotCom Great job, Thanks from every girl & her parents.