How Archimedes' Principle Helped In Rescue Of Elephant In Jharkhand

Three motorised pumps were used to fill the well with water so the elephant could float up. 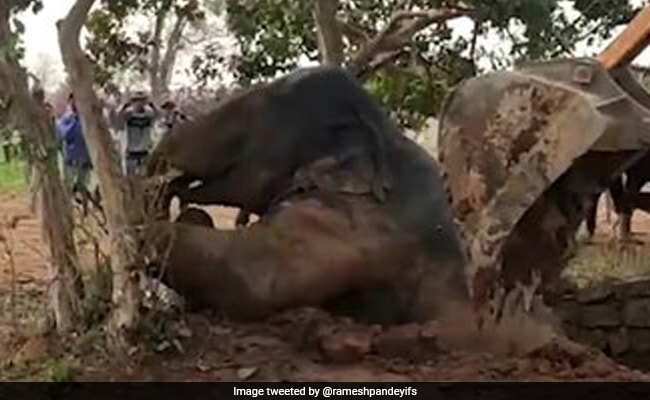 A picture shared by IFS officer Ramesh Pandey shows the elephant climbing out of the well.

Forest department officials in Jharkhand are being praised for applying a scientific principle in real life to rescue a stranded elephant. In the early hours of Tuesday, the elephant accidentally fell into a well in the state's Gumla district. The incident occurred in Amliya toli village, where locals saw the distressed elephant and called the forest department for help.

According to Yahoo News, forest department officials rushed to rescue the stranded elephant at around 7 am on Tuesday. The rescue operation lasted three hours, during which time officials pumped water into the well so the pachyderm could float up.

Three motorised pumps were used to fill the well with water, and a ramp was excavated for the elephant to climb out.

Indian Forest Service officer Ramesh Pandey praised the Divisional Forest Officer, Gumla, as well as the state's forest department in a tweet where he applauded the use of Archimedes' principle to float the elephant up.

"Heartwarming pictures of how intelligently the team @dfogumla and villagers using Archimedes's physical law of buoyancy save an elephant calf who had fell in a well," he wrote. "They pumped water into well to float the elephant to surface. Great work."

Heartwarming pictures of how intelligently the team @dfogumla and villagers using Archimedes's physical law of buoyancy save an elephant calf who had fell in a well. They pumped water into well to float the elephant to surface. Great work. @Forest_Dept_GOJpic.twitter.com/DP8ydrctsp

Other Twitter users also praised the application of science to rescue the elephant and thanked the forest department:

Marvelous example of traditional scientific knowledge of the village. In day to day activities more people are using such knowledge to live their lives in comfortable ways.

Science come to save an elephant calf! Remarkable presence of mind by the team! https://t.co/zbfm7fXah9

The elephant did not suffer any injuries and went into the forest after climbing out of the well.