Ott Tanak and his co-driver miraculously survived the crash. 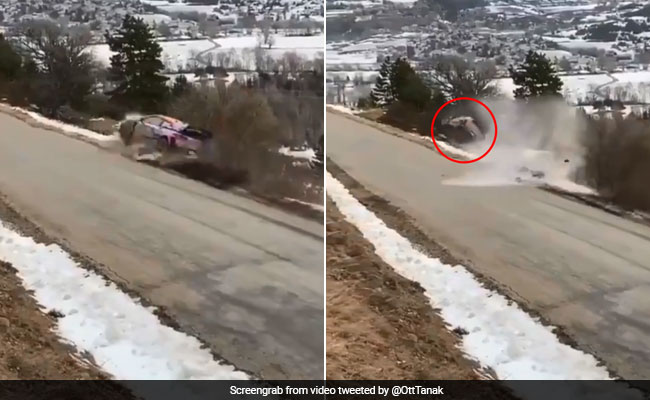 Ott Tanak shared a video that shows his car spinning before flying off the road.

World champion Ott Tanak and his co-driver miraculously escaped unscathed on Friday after their Hyundai somersaulted off the road and plunged down a hillside. The incident occurred during the Monte Carlo Rally - Mr Tanak's first for his new team.

Horrifying footage of the crash, shared by Ott Tanak on Twitter, shows their car flying off the icy road and bouncing in the air. It spins through a tree before landing at the foot of a hill. It shows the two people in the car - Mr Tanak and co-driver Martin Jarveoja - climbing out after the crash.

"Here's what happened this morning. But we are recovering well and will be fit soon," wrote Mr Tanak while sharing the footage on Twitter.

Here's what happened this morning. 🤕 But we are recovering well and will be fit soon. 💪#WRC#RallyeMonteCarlopic.twitter.com/tgDIX8IMzJ

The video has been viewed more than 4.7 lakh times since it was shared on Saturday and has been flooded with shocked comments.

Good man Ott !!! Was worried about you both for a while!!! Take care ... your health is far more important!

"Precautionary medical checks have confirmed that Ott Tanak and Martin Jarveoja are fine following their crash," the team said in a statement after the pair had been checked over in hospital where they were due to remain overnight.

"But the Estonians will take no further part in the rally," it added.

Ott Tanak, 32, has never won the Monte Carlo Rally. He was in fourth place overall when he crashed.