Read inOther Languages
This Article is From Dec 21, 2020 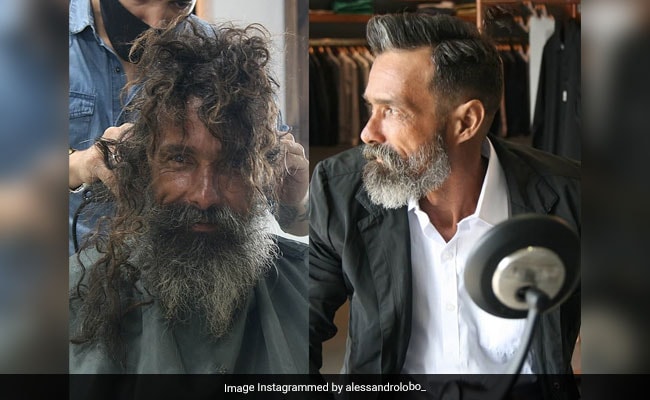 A homeless man in Brazil was reunited with his family after his photograph went viral online. In an incident that illustrates the power of social media, Joao Coelho Guimaraes met his mother and sister after a decade of living on the streets. His family had assumed he was dead, but recognised him when his photograph was posted on Instagram by a businessman named Alessandro Lobo, who owns a men's fashion store and barber service, according to Unilad.

The incident unfolded when Mr Lobo asked Mr Guimaraes if he was hungry and offered him food.

While Mr Guimaraes turned down the offer of food, he did request a razor to trim his overgrown beard.

Alessandro Lobo went a step further and groomed his beard, hair and moustache. He also gifted Mr Guimaraes with new clothes. "That was when we decided to help him in a different way, providing a day of beauty for him," Mr Lobo told local news outlets.

The businessman took 'before and after' photographs to capture the transformation and shared them on Instagram.

His posts detailing the change brought about by a simple haircut and grooming session went viral on social media, where they were seen by Mr Guimaraes's family.

Mr Guimaraes's sister and mother had not heard from him in a decade. They had assumed he was dead, but realised he was alive and well after seeing his photographs surface online.

On December 17, they travelled to the city of Goiania to meet him.

"It is Christmas time and the intention was to show that with a little we can change someone's life... We did not imagine that it would have this result," said Mr Lobo of the heartwarming reunion tale.