3.8 million views for this video. 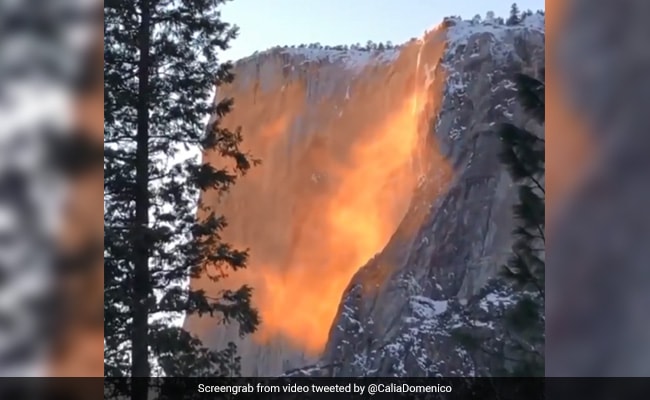 A video going viral on Twitter shows a glowing "firefall".

A stunning video that has gone viral online appears to show a river of fire falling down the side of a cliff. The video was shared online on Sunday by Twitter user '@CaliaDomenico', where it has gone viral with a whopping 3.8 million views in just two days.

The viral footage has raised many questions about what is actually happening in the video - is that actually fire falling down a cliff? The answer is no - the clip just shows a simple waterfall.

The video has captured one of Yosemite National Park's most amazing spectacles: The Yosemite Firefall.

Officially called the Horsetail Fall, this waterfall in California glows orange and red for just two weeks in February every  year. According to ABC News, this happens when the sun's rays hit the waterfall at just the right angle, making it look like an illuminated river of fire or lava flowing down a volcano.

“Firefall” at Horsetail Fall in Yosemite National Park, California, looks like a scene from a fantasy movie. But, it is an ordinary waterfall, which is illuminated by the sunset, that gives it a fiery glow. pic.twitter.com/kP2aFmM6Cg

The "firefall", as it is popularly known, has gone viral on Twitter with more than 3.8 lakh 'likes' and thousands of comments.

The Horsetail Fall plunges about 2,000 feet down the El Capitan rock formation at Yosemite National Park.

The firefall only glows orange for a few minutes each day, for two weeks in February. According to the US National Parks Service, this unique lighting effect happens only on evenings with a clear sky when the waterfall is flowing, and even the slightest bit of haze can diminish the effect.