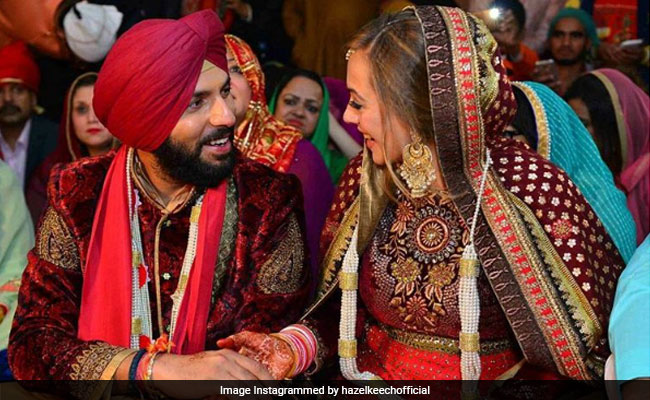 Yuvraj Singh and Hazel Keech tied the knot at gurudwara in Chandigarh on November 30.

Cricket fan or not, by now you've probably heard or read about Yuvraj Singh's recent heroics with the bat during India's second ODI match against England in Cuttack on January 19. Yuvi hit his first century (150 runs off 127 balls) since 2011 and forged a 256-run partnership with former captain M S Dhoni to take a 2-0 lead in the three-match series. Now, as the world lauds the southpaw's brilliant knock, it is a note from the 35-year-old sportstar's wife of two months, actor-model Hazel Keech, that's winning several hearts on social media. Yuvraj and Hazel tied the knot at gurudwara in Chandigarh on November 30, followed by a second ceremony according to Hindu traditions in Goa on December 2.

"'Fierce' should be his middle name," says Hazel in an Instagram post shared some 14 hours before writing this. Her heartwarming note about her husband's century against England and fight against cancer has since received almost 20,000 'likes' and hundreds of comments on the photo sharing site.

"150 runs from 127 balls, Man of the Match, India won 2-0 against England in ODIs. Not forgetting coming back from CANCER, getting his health and fitness back post chemo therapy and finally being in the ODI team after all of that. Throw in a wedding somewhere," she says on Instagram, adding that this is what perseverance looks like.

"Fierce" should be his middle name. 150 runs from 127 balls, Man of the Match, India won 2-0 against England in ODIs. Not forgetting coming back from CANCER, getting his health and fitness back post chemo therapy and finally being in the ODI team after all of that. Throw in a wedding somewhere. That, ladies and gentleman, it what it looks like to never give up. Theres the difference in surviving cancer and beating cancer #doitagain #takeyourlifeback #YuvrajFierceSingh #hero #ywc @yuvisofficial

Promoted
Listen to the latest songs, only on JioSaavn.com
"Well said," said one commenter. "Not possible for common man... it's Yuvraj who made it possible. Superb show," said another. "Very very true Hazel. Spot on. Man is a HERO. Salute to him. God bless him," an Instagram user said.

Several celebrities have also praised Yuvraj for his stellar performance in the match. Bollywood biggie Amitabh Bachchan, cricket icons Sachin Tendulkar, Virender Sehwag, Sourav Ganguly and Harbhajan Singh, and actors Riteish Deshmukh and Varun Dhawan were among those who tweeted about Yuvi and Dhoni.

T 2508 - INDIA thrash the British .. !! Yuvraj, it is the champion that disproves with his proof .. you were an exceptional Champion today pic.twitter.com/DH3f7oWFgp

What an amazing partnership between a superstar and a rockstar!! We enjoyed the show :) @YUVSTRONG12@msdhoni#INDvENGpic.twitter.com/mU8o3iJfZi

This man has defeated Cancer.
Today,he only defeated the English bowlers.Everyone can learn not to give up.
Proud of @YUVSTRONG12#INDvENGpic.twitter.com/1wdBhpKEAa

Only old notes are out of circulation.
Great knocks from @YUVSTRONG12 and @msdhoni . pic.twitter.com/A87EmghpV8

Singh is truly the KING.... Champions deliver when it matters the most. Congratulations my friend @YUVSTRONG12pic.twitter.com/tfccwJoZLL

@YUVSTRONG12 is back!!!!!amazing to see yuvi and dhoni on the crease again

We hope Yuvraj Singh, M S Doni and the team win the series 3-0. Here's looking at you, Kolkata.