Footage shows that the performance started off with Greta Thunberg telling the audience "We are no strangers to love" - the opening lyrics to the Rick Astley song. 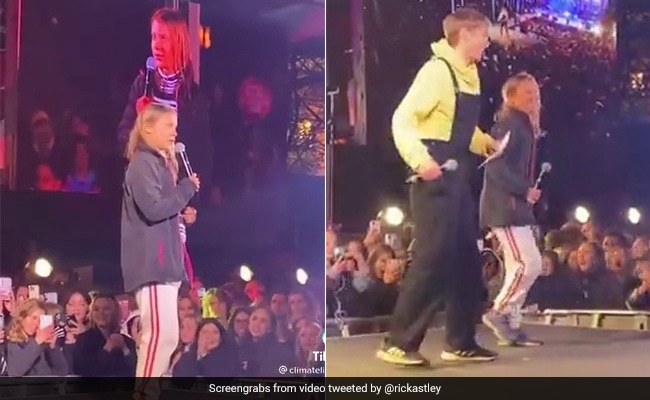 Greta Thunberg was filmed dancing and singing at a climate concert.

Swedish activist Greta Thunberg surprised the crowd by dancing at a climate concert in Stockholm, Sweden, over the weekend. The 18-year-old sang and danced in front of a screaming audience to the 1980s song 'Never Gonna Give You Up' by British singer Rick Astley. Greta Thunberg "Rickrolled" the audience on Saturday as she took the stage during Climate Live, a youth-led concert for climate action.

Climate Live shared footage of the teenage activist dancing onstage on its Instagram.

Footage shows that the performance started off with Greta Thunberg telling the audience "We are no strangers to love" - the opening lyrics to the Rick Astley song.

"You know the rules, and so do I," a fellow activist, also on the stage, continues. The two then bust out dancing as 'Never Gonna Give You Up' blares over the speakers. People in the audience were heard screaming as Greta Thunberg showed off some impressive moves.

Rick Astley himself shared the footage on Twitter, calling it "fantastic".

Many on social media were delighted with Greta's "Rickrolling". Rickrolling is an internet phenomenon which involves getting someone to open Rick Astley's hit song from the 80s by sending them a disguised URL.

This, in fact, is not the first time that Greta Thunberg has deployed the Rickroll. On April Fools' Day, she tweeted that she had created a video to "talk about some small things we ALL can and should do to stop the climate crisis." Twitter users who clicked on the purported video link were instead directed to to the song.

I made a video where I talk about some small things we ALL can and should do to stop the climate crisis.
We are in this together, and everyone is needed. YOU get to decide what future you'll live in.
So please watch, share and start doing your part today!https://t.co/KDtgZQcgA7pic.twitter.com/nCNn9rGMZb

The concert was organised ahead of the COP26, the 26th Conference of the Parties to the UN Convention on Climate Change, which is scheduled for November.

Greta Thunberg, whose Fridays For Future movement has inspired massive street protests around the world, said activists need to keep on "pushing" for real change.

"As it is now, this COP will not lead to any big changes, we're going to have to continue pushing," she told AFP on the sidelines of the climate concert organised in Stockholm.

Thousands braved the autumnal cold to listen to around 20 acts performed at the concert.