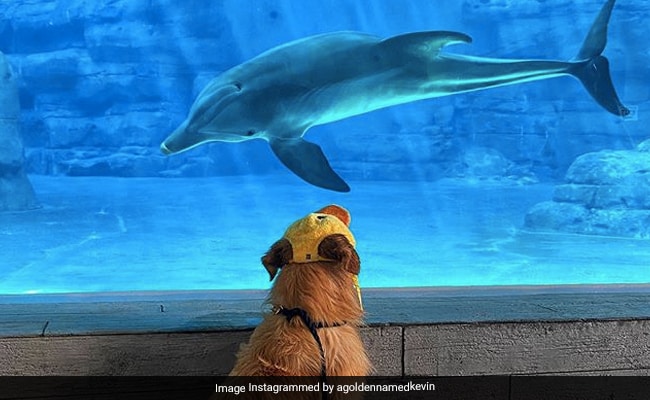 An Instagram-famous golden retriever has doubled the cuteness quotient on the platform with his posts about meeting his dolphin friends. According to People Magazine, Kevin is a golden retriever from Tampa, Florida, who is famous for his cute duck hat. In July this year, Kevin caught the attention of the Clearwater Marine Aquarium, which houses a duck-loving rescue dolphin named Winter.

The Clearwater Marine Aquarium invited Kevin to video chat with Winter the dolphin and her keeper, Katie Wojdyla. They also sent Kevin a video of the dolphin playing with a rubber duck while inviting him to a virtual meeting. A clip shared on Instagram by the aquarium shows Kevin the golden retriever sniffing curiously at the laptop screen while watching the video.

We were hoping to make new friends on #InternationalDayOfFriendship and we think this can be the start of something special! Would you like to FaceTime soon @agoldennamedkevin?

"Is This The Start Of A Pawfect Friendship?" the aquarium asked while sharing the video - and turns out, it actually was.

According to Travel + Leisure, Kevin's owner, Elysse Gorney, took him on a trip to the aquarium on August 7 - and it was all documented on Instagram for his 2 lakh followers.

"Kevin had the entire aquarium to himself and he met so many new friends," Ms Gorney said.

At the aquarium, the golden retriever got to meet Winter and the other dolphins, Hope, PJ, Nicholas, and Hemingway.

A video of the meeting has collected thousands of views and gushing comments on the photo and video sharing platform.

"Looks the most amazingest day ever!!" wrote one Instagram user, while another said, "This is quite possibly the greatest video every created."

Another video, which has collected over 1.5 lakh views on Instagram, shows the dog meeting other aquarium residents like pelicans.

This boy sure does love meeting new friends ???? @cmaquarium . . . Tag a friend who you are thankful for!

Winter the dolphin received a prosthetic tail after getting caught in a crab trap. Winter has starred in films such as Dolphin Tale and Dolphin Tale 2.