Spotted In Australia: A Monster Moth So Heavy That It Can't Fly

The school's principal, Meagan Steward, called it an "amazing find". 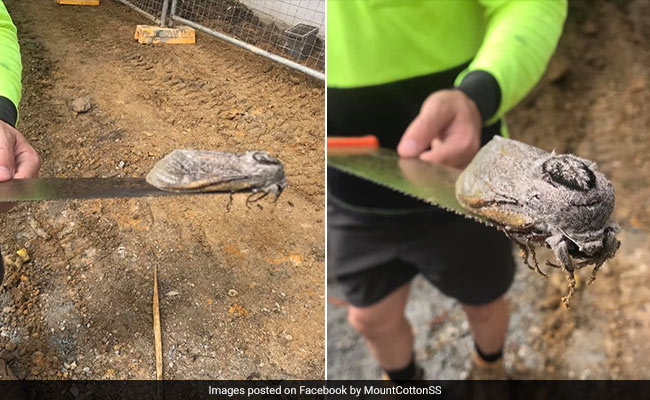 Builders took photos of the giant wood moth before returning it to the forest.

A giant moth -- so big and so heavy that it struggled to fly -- was found at an Australian school on Monday. Builders found the giant wood moth while constructing new classrooms at Queensland's Mount Cotton state school, reports The Guardian. The moth was described as being about as big as a rat.

The school's principal, Meagan Steward, called it an "amazing find".

"Our new building is situated on the edge of a rainforest and during the build the moth was found," Ms Steward told ABC Radio Brisbane. She said that while staff and students were used to seeing a range of animals at the school, the moth was unlike anything they had seen before.

The school shared photos of the giant wood moth on Facebook, where they generated a huge interest and registered hundreds of 'likes', comments and shares.

The giant wood moth, also known as the Endoxyla cinereus, is found along the Queensland and New South Wales coast. According to Dr Christine Lambkin, Queensland Museum's head of entomology, giant wood moths are the heaviest in the world.

"They fly very, very poorly. In most cases when they emerge, the females, they just crawl up a local tree or stump of a fence post and sit there and wait for males to find them," Dr Lambkin said.

The females, about twice the size of the males, can weigh up to 30 grams and boasts a wingspan of up to 25 centimetres.

Giant wood moths are rarely spotted by humans. They live only a few days as adults, according to the Australian Museum.

At Mount Cotton state school, builders took photos of the moth before returning it to the forest. The insect did serve as inspiration for the school's creative writing class - and inspired at least one cheeky story about a teacher getting eaten by a giant wood moth.