In the unbelievable video, the huge reptile was seen scrambling up a set of shelves inside the store. 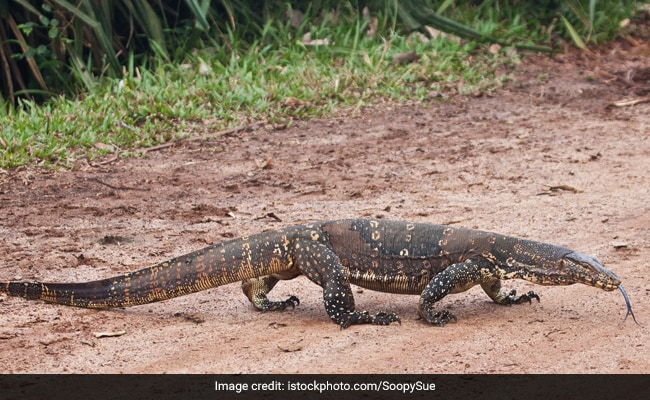 A monitor lizard was spotted inside a supermarket in Thailand. (Representative Image)

A video going viral online shows a giant monitor lizard knocking down products and sparking chaos at a supermarket. The hair-raising footage was filmed at a 7 Eleven outlet in Thailand and originally shared on Twitter by Thai travel agency Mundo Nomada on Wednesday afternoon.

In the unbelievable video, the huge reptile was seen scrambling up a set of shelves inside the store, knocking down a number of items in the process. Horrified customers were heard screaming and laughing in the background as the giant lizard made its ascent to the top. After reaching the top, it stopped for a rest even as onlookers continued to film the unusual sight.

Although the video shared by Mundo Nomada on Wednesday was deleted, a re-post of the same clip has gone massively viral with over 6 million views.

"Godzilla is real guys," wrote one Twitter user, while another described the scene as "nightmarish".

However, others found humour in the situation, with one viewer saying that the lizard just wanted some "top shelf snacks" and another writing it "should have just waited and asked an employee to reach the high shelf".

After the video went viral on social media, Mundo Nomada identified the reptile as a monitor lizard in a follow-up tweet. "The animal in the video is an Asian water monitor," the tour operating company wrote. "You can easily find them in Bangkok (for ex. Lumphini Park) and other parts of Thailand. They often eat carrion. Thai people use the name of this animal as an insult."

The travel agency also identified the author of the video as Jejene Narumpa, who shared the clip on her Facebook account.