Genetically altered salmon get closer to the table 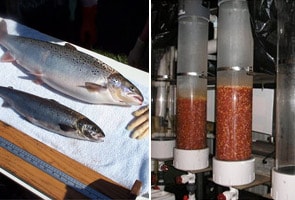 New York: The Food and Drug Administration is seriously considering whether to approve the first genetically engineered animal that people would eat -- salmon that can grow at twice the normal rate.

The developer of the salmon has been trying to get approval for a decade. But the company now seems to have submitted most or all of the data the F.D.A. needs to analyze whether the salmon are safe to eat, nutritionally equivalent to other salmon and safe for the environment, according to government and biotechnology industry officials. A public meeting to discuss the salmon may be held as early as this fall.

The salmon's approval would help open a path for companies and academic scientists developing other genetically engineered animals, like cattle resistant to mad cow disease or pigs that could supply healthier bacon. Next in line behind the salmon for possible approval would probably be the "enviropig," developed at a Canadian university, which has less phosphorus pollution in its manure.

The salmon was developed by a company called AquaBounty Technologies and would be raised in fish farms. It is an Atlantic salmon that contains a growth hormone gene from a Chinook salmon as well as a genetic on-switch from the ocean pout, a distant relative of the salmon.

Normally, salmon do not make growth hormone in cold weather. But the pout's on-switch keeps production of the hormone going year round. The result is salmon that can grow to market size in 16 to 18 months instead of three years, though the company says the modified salmon will not end up any bigger than a conventional fish.

"You don't get salmon the size of the Hindenburg," said Ronald L. Stotish, the chief executive of AquaBounty. "You can get to those target weights in a shorter time."

AquaBounty, which is based in Waltham, Mass., and publicly traded in London, said last week that the F.D.A. had signed off on five of the seven sets of data required to demonstrate that the fish was safe for consumption and for the environment. It said it demonstrated, for instance, that the inserted gene did not change through multiple generations and that the genetic engineering did not harm the animals.

"Perhaps in the next few months, we expect to see a final approval," Mr. Stotish said.

But the company has been overly optimistic before.

He said it would take two or three years after approval for the salmon to reach supermarkets.

The F.D.A. confirmed it was reviewing the salmon but, because of confidentiality rules, would not comment further.

Under a policy announced in 2008, the F.D.A. is regulating genetically engineered animals as if they were veterinary drugs and using the rules for those drugs. And applications for approval of new drugs must be kept confidential by the agency.

"There is no opportunity for anyone from the outside to see the data or criticize it," said Margaret Mellon, director of the food and environment program at the Union of Concerned Scientists. When consumer groups were invited to discuss biotechnology policy with top F.D.A. officials last month, Ms. Mellon said she warned the officials that approval of the salmon would generate "a firestorm of negative response."

How consumers will react is not entirely clear. Some public opinion surveys have shown that Americans are more wary about genetically engineered animals than about the genetically engineered crops now used in a huge number of foods. But other polls suggest that many Americans would accept the animals if they offered environmental or nutritional benefits.

Mr. Stotish said the benefit of the fast-growing salmon would be to help supply the world's food needs using fewer resources.

Government officials and industry executives say the F.D.A. is moving cautiously on the salmon. "It's going to be a P. R. issue," said one government official, who spoke on the condition of anonymity because he was not authorized to speak about the issue.

Some of these government officials and executives said that F.D.A. officials had discussed internally whether the salmon could be labeled to give consumers the choice of avoiding them.

The government has in the past opposed mandatory labeling of foods from genetically engineered crops and animals merely because genetic engineering was used. Foods must be labeled, it says, only if they are different in their nutritional properties or other characteristics.

It would seem difficult for the government to change that policy. And experts say the administration may not have the legal authority to do so.

One possibility could be voluntary labeling by those who sell the fish.

Dr. Joshua M. Sharfstein, the principal deputy commissioner of the F.D.A., said in a statement: "Labeling is one of many issues involved with the review of genetically engineered animals for use in food. As has been publicly reported, the AquAdvantage Salmon is under review by the agency, and as we move forward, we will share information with the public."

Mr. Stotish of AquaBounty said his company was not against voluntary labeling, but the matter was not in its hands because it would only be selling fish eggs to fish farms, not grown salmon to the supermarket.

He said the company had submitted data to the F.D.A. showing that its salmon was indistinguishable from nonengineered Atlantic salmon in terms of taste, color, vitamins, minerals, fatty acids, proteins and other nutrients.

"Our fish is identical in every measurable way to the traditional food Atlantic salmon," Mr. Stotish said. "If there's no material difference, then it would be misleading to require labeling."

Virtually all Atlantic salmon now comes from fish farms, not the wild.

The F.D.A. must also decide on the environmental risks from the salmon. Some experts have speculated that fast-growing fish could out-compete wild fish for food or mates.

Mr. Stotish said the salmon would be grown only in inland tanks or other contained facilities, not in ocean pens where they might escape into the wild. And the fish would all be female and sterile, making it impossible for them to mate.

Promoted
Listen to the latest songs, only on JioSaavn.com
The F.D.A. is expected to hold a public meeting of an advisory committee before deciding whether to approve the salmon. Typically at such advisory committee meetings, much of the data in support of the drug application is made public and there is some time allotted for public comment.

But Gregory Jaffe, biotechnology project director of the Center for Science in the Public Interest, said such meetings often do not give the public enough time to analyze the data.