IFS Officer Inspires Children To Give Up Slingshots, Save Birds

The response to the initiative that started on World Environment Day on June 5, 2021, has been “heartening”, said the IFS officer. 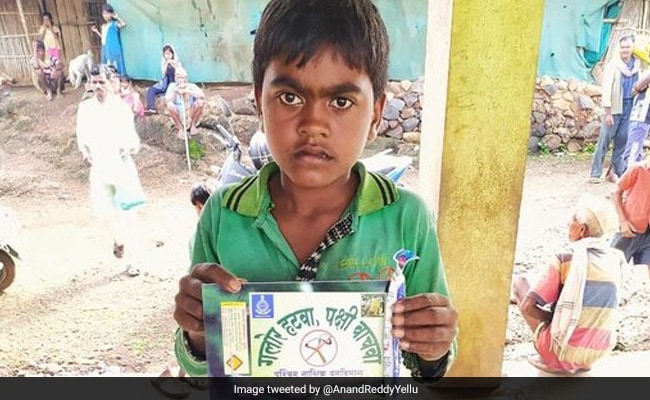 The officer has turned the initiative into a movement

“Change a child, you'll change a generation” — it is this belief that has shaped an Indian Forest Service (IFS) officer's desire to inspire children of many villages around Nashik in Maharashtra to stop using “galor” (slingshots) and protect birds.Anand Reddy, the IFS officer, informed his Twitter followers how he addressed the “dilemma” of seeing a “cute kid” kill a “bird with this slingshot”, and asked, “will you punish the kid?” It all started as an initiative of “Galor Samarpan Abhiyan” a month ago on World Environment Day — June 5. Mr Reddy said that the response to the initiative since has been “hugely heartening” for him.

Mr Reddy began his Twitter post by stating that it's commonplace in the villages surrounding Nashik to see children playing with slingshots. This, he said, “leads to empty forests — no birds, no chirping, no singing. Only silence.”

You see a cute bird. And you see a cute kid. Then you see the kid kill the bird with this slingshot. Will you punish the kid?

This is very common in many villages in Nashik. It leads to empty forests - no birds, no chirping, no singing.
Only silence! pic.twitter.com/XDg85fcbz2

So, what did Mr Reddy do to “make these innocent kids stop using galor (slingshot)?”

He suggested a four-point solution: “By talking to each child. By telling each kid how painful it is. By making them promise never to use it again. By nudging them to ‘voluntarily surrender galor'.”

He added that these four points put together effectively meant “winning their (the kids') hearts.”

So how to make these innocent kids stop using galor (slingshot)?

By talking to each child.
By telling each kid how painful it is.
By making them promise never to use again.
By nudging them to "voluntarily #surrender Galor"

In short, by winning their hearts! ❤️ pic.twitter.com/ktxTIzjrM3

He also posted a short video on how they “made this into a movement”. The clip shows a group of children marching on a lane in the village, holding a banner that reads in Marathi, “Galor hatwa, pakshi bachwa (discard galor, save birds)”.

Video from a village on how children made this into a #movementpic.twitter.com/yvD7Zi1RpW

Happy at the “heartening” response the initiative has received since its inception on June 5, 2021, Mr Reddy said that “kids from 68 villages took the pledge”, and added that “590 galors were voluntarily surrendered”. A photo collage also shows the children taking the pledge not to hurt the birds.

What started as a small initiative of 'Galor Samarpan Abhiyan' on this #environmentday, last 30 days were hugely heartening for me -

• 590 Galors were voluntarily surrendered until
• Kids from 68 villages took #pledge
• Some kids even reached out to staff to surrender! pic.twitter.com/BRwtVheYcj

Now, the children in the villages themselves are taking this initiative forward and even helping raise public awareness about such environmental issues.

Once our green warriors found the purpose, they worked relentlessly - nights, weekends & in rains to reach out to every kid.

It was great to see true #Teameffort ! pic.twitter.com/oE6HjOvIid

The thread received a huge response from Mr Reddy's followers.

A user felt that more such initiatives were needed “across the country so that our environment and wildlife teem with life.”

Such a wonderful initiative . It is said that journey of a thousand miles begins with a single step . We need many more such initiatives across the country so that our environment and wildlife teem with life .

Another said that there was now “hope for a better, kinder tomorrow”.

Thank you, @AnandReddyYellu for efforts & for bringing about this heartwarming change in these little kids! ????
There's now hope! Hope for a better, kinder tomorrow, and who better to bring about that change than compassionate children... #saveforests#children#savetheplanethttps://t.co/TJBYEeuyMI

A user felt that the effort was “truly commendable” and “should be known and implemented across India as ‘Anand Reddy Model' of winning heart."

Some felt that this was the way to make a difference — by winning hearts, not by dominating brains.

Amazing work! This is how a difference is made. By winning hearts, not my dominating brains. https://t.co/N7YN6qBIeV

For one viewer this thread was overwhelming. “It makes me realise just how many issues there are to fix and what a long battle we have ahead of us,” she tweeted.

Every time I come across such a thread I get so overwhelmed. It makes me realize just how many issues there are to fix & what a long battle we have ahead of us. But people like @AnandReddyYellu prove how crucial it is to just do YOUR bit.#YouCanChangeTheWorld 1 area at a time. https://t.co/U1DMg7AOsQ

Carrying slingshots have been a norm in many rural settlements. However, thanks to Mr Reddy's determination, the children in these Nashik villages now know about the negative impacts of killing birds. So, what else do you think can be done to drive the message of wildlife conservation even further? Tell us in the comments section below.