From Elon Musk And Bajirao To Drake And Athiya: The Best Crossovers Of 2018 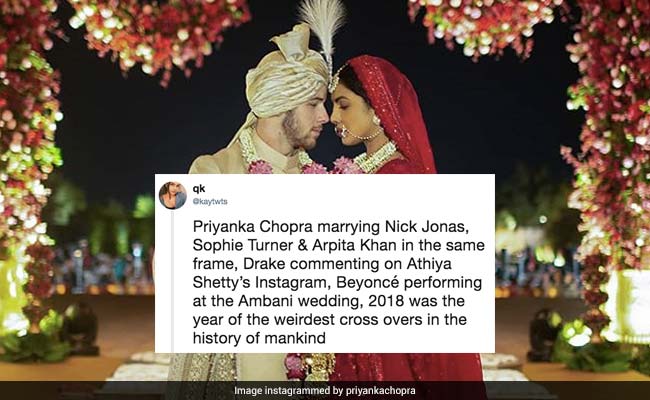 What was your favourite 2018 crossover?

Can we just name 2018 the year of crossovers already? Because Avengers: Infinity War crossovers had nothing - nothing - on the year that 2018 was for Indians. From Drake and Athiya Shetty's unlikely friendship to Elon Musk tweeting about Bajirao Mastani, this year was a year full of surprises. And as we get ready to bid goodbye to it, we decided to do a compilation of the best, most surprising crossovers of 2018. Take a look:

The year of crossovers began in July with John Cena quoting none other than the Badshah of Bollywood, Shah Rukh Khan. The WWE star took to the micro blogging website to share some inspiring words by SRK, and SRK responded to the tweet as well.

Thanks my friend for spreading the goodness. It's important to inspire so many kids who look up to u as their hero. https://t.co/nTyGVSrrrr

In perhaps the unlikeliest of all crossovers, American rapper Drake commented on Athiya Shetty's pic on Instagram. Back in August, Athiya shared a picture with her dad Suniel Shetty to wish him on his birthday. Netizens were surprised to see Drake's comment on the pic, calling Suniel Shetty a legend.

These 2018 crossovers are getting WAY too weird pic.twitter.com/0U6qkqYDsN

Of all the weird 2018 crossovers this one has to be the WEIRDEST. Guess drake and athiya will be the next top jodi in bollywood pic.twitter.com/PA9TmPcXt0

For some, the strangest crossover of 2018 was also one of the year's biggest weddings. Bollywood star Priyanka Chopra got married to Nick Jonas in Jodhpur early December. For a lot of Bollywood and Disney Channel fans, it was a crossover they never thought they would see!

honestly this priyanka-nick wedding was the craziest crossover episode ever

Here is a sentence we never thought we'd have to write, and we have Isha Ambani's big fat Indian wedding to thank for this. During the pre-wedding celebrations in Udaipur earlier this month, netizens were treated to a video of two former US Secretaries of State dancing to Bollywood songs with Nita Ambani and Shah Rukh Khan. Take a look at Hillary Clinton and John Kerry shaking a leg to Abhi Toh Party Shuru Hui Hai and Tune Maari Entriyaan.

5.    The Kardashians dancing to Mundian To Bach Ke

A video you'd want to keep watching! An Instagram story shared by Kendall Jenner from the Kardashian Christmas party shows the family dancing to the hit Punjabi number Mundian To Bach Ke - and social media is amazed. Definitely one of the best crossovers of this year.

never did i think the kardashians would be dancing to mundian to bach ke pic.twitter.com/Pnq3qnqhTl

A few days ago, billionaire tech entrepreneur Elon Musk discovered a video of a song from of the 2015 Deepika Padukone-Ranveer Singh starrer Bajirao Mastani - and tweeted it out with two hearts! Without any exaggeration, this 2018 crossover created quite a storm on Twitter.

Which crossover did you like best? Let us know using the comments section below.