The reptile was later relocated to Lake McLeod, the Sherrif said 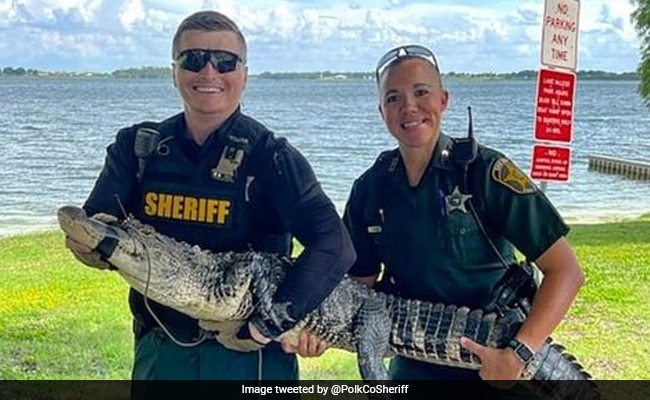 Polk County Sheriff's Office shared a picture of the intruder on Twitter.

A police officer's life is no doubt a tough one. While fighting crime for a living comes with its fair share of surprises and shocks, some days are just more unusual than the others. And recently, the officers of the Polk County in Florida were in for one such exciting day when they met with a rather unusual visitor in the front yard of a home. No, it was not a masked intruder or a miscreant as one may imagine, but a 5.5-foot-long alligator that the two deputies were up against. And before you worry about how it ended, we must assure you that the deputies were successful in rescuing the reptile.

The development was shared on Twitter by the official handle of the Polk County Sheriff's Office. It seemed like just another day at work when the Sherrif announced that a deputy officer had worked with members of the fire department to save a kitten. Sharing a photo of the three-member rescue team with a seemingly bewildered kitten, the tweet read, "All in a night's work! Dep Hopkins and friends from My Davenport Fire rescued this tiny kitten from a drainpipe after Hopkins crawled into a manhole." And in an additional note that made the internet crack up, the Sherrif added, "He's had his shots and already been adopted (the kitten, not the dep)."

And just when the kitten rescue seemed to be the highlight of the day, came the news of the alligator that was sighted on the front porch of a house. Sharing a photo of the alligator resting on the back seat of the police car after it was rescued, the tweet said, "Not to be outdone by a kitten rescue, Deputies Hardy and Ferguson apprehended this 5.5-foot intruder from a family's porch in Eagle Lake yesterday and relocated him to Lake McLeod. They were sure to say 'see ya later'."

All in a night's work! Dep Hopkins & friends from @MyDavenportFL Fire rescued this tiny kitten from a drainpipe after Hopkins crawled into a manhole. He's had his shots & already been adopted (the kitten, not the dep) #teamwork#kittenrescue#weareafullservicelawenforcementagencypic.twitter.com/LdLfYuwEys

Not to be outdone by a kitten rescue, Deputies Hardy & Ferguson apprehended this 5.5 foot intruder from a family's porch in Eagle Lake yesterday & relocated him to Lake McLeod. They were sure to say "see ya later." #gatorpatrol#onlyinPolk#onlyinFL#weliveherepic.twitter.com/skiITnjD5P

Despite the officer mentioning that the alligator was released into the lake after the rescue operation, several social media users were insistent that the replied be "freed". One user said, "Free my boy he did nothing," while another said, "Free my man he ain't do nothing."

Free my boy he did nothing

Well, tell us what you think of the incident.